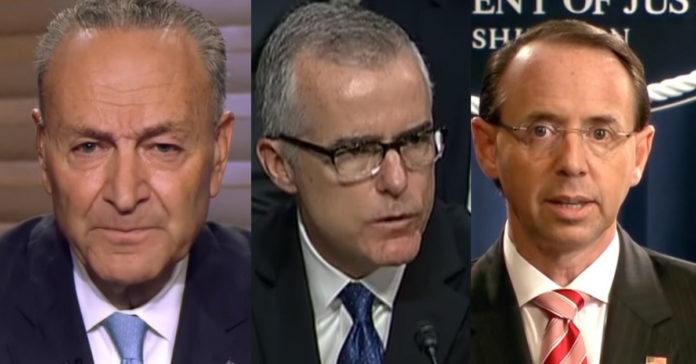 The deep state is tearing itself apart, as was expected. Rosenstein got caught by none other than Andrew McCabe.

Andy took notes of Rosenstein and others and the New York Times is standing by the story that Rod was serious in calling for a 25th amendment solution.

Some close to Rod tried to float the idea that he was just being sarcastic but that was refuted by the reporters.

In other words, it is a deep state showdown – McCabe versus Rosenstein and the winner is Trump.

As reported by ABC News:

Sources familiar with the memos of former FBI Deputy Director Andrew McCabe tell ABC News that, according to those memos, during a conversation in May 2017 between McCabe and Deputy Attorney General Rod Rosenstein, Rosenstein suggested that McCabe or others wear a wire when speaking with President Donald Trump.

Additionally, sources tell ABC News according to the memos – Rosenstein told McCabe he could recruit members of the president’s cabinet to invoke the 25th Amendment to remove President Trump from office for being unfit. Rosenstein believed he would be able to convince Attorney General Jeff Sessions and then-Homeland Security Secretary John Kelly to sign on, according to the sources.

One source who was in the meeting confirmed that Rosenstein did make a remark about recording Trump with the use of a wire. But the source insists: “The statement was sarcastic and was never discussed with any intention of recording a conversation with the president.”

In response to the story, McCabe’s attorney’s issued the following statement to ABC News: “Andrew McCabe drafted memos to memorialize significant discussions he had with high-level officials and preserved them so he would have an accurate, contemporaneous record of those discussions. When he was interviewed by the Special Counsel more than a year ago, he gave all of his memos – classified and unclassified – to the Special Counsel’s office. A set of those memos remained at the FBI at the time of his departure in late January 2018. He has no knowledge of how any member of the media obtained those memos.”

In May of 2017, after the firing of then-FBI director James Comey, ABC News reported that Rosenstein was so upset with the White House for pinning Comey’s dismissal on him that he was on the verge of resigning.

Schumer: “This story must not be used as a pretext for the corrupt purpose of firing Deputy Attorney General Rosenstein in order install an official who will allow the president to interfere with the Special Counsel’s investigation."