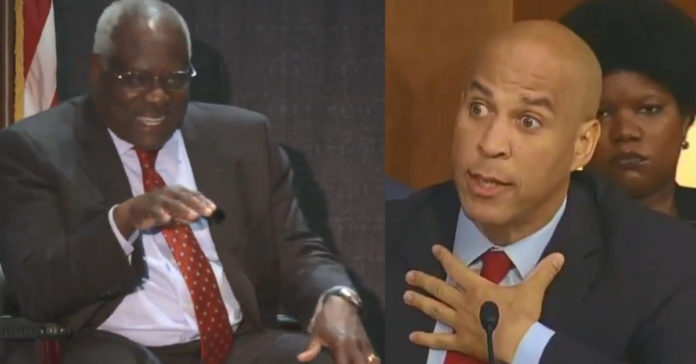 Clarence Thomas is a man of few words so when he does speak in public everyone listens closely.

If Cory Booker was, his ears are burning because the Supreme Court justice just mocked him to his grandstanding core.

If you missed it, Booker made a spectacle of himself during the Brett Kavanaugh hearing.

He could not change the inevitable, that Brett would be confirmed, so he made himself a fake martyr and turned the hearing into a joke.

He even called himself Spartacus.

However, one of the biggest burns of Booker came from sitting Supreme Court Justice Clarence Thomas. Speaking with the Federalist Society, Justice Thomas was asked about the general politicization of the court by politicians and preserving the “legitimacy” of the court.

Thomas scoffed at the question, saying that justices need to be “honest,” and “follow the law.” Thomas then said that the word “honorable” needs to be used more in relation to those in public life. Thomas said “Honorable – if we could use that word about more people who are in public life, people who actually ask the questions at confirmation hearings, instead of ‘Spartacus’…”

Thomas was interrupted by the audience in the room, who loved the dig at Booker.

From last week, Justice Clarence Thomas: "Honorable – if we could use that word about more people who are in public life, people who actually ask the questions at confirmation hearings, instead of 'Spartacus'…"

It Begins: Hollywood Superstar Calls For Clarence Thomas To Resign