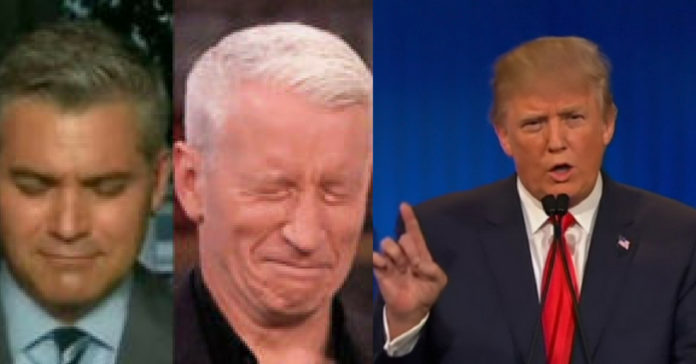 By now it shouldn’t come as any surprise that CNN tends to run garbage stories if they think they can take a shit at President Trump.

The other networks do it too and even Fox has a way to shade a story to reflect their narrative.

But none is as blatant as CNN and none has ever been caught so flagrantly out in the open in such a humiliating fashion.

But they did. As reported by Breitbart: CNN is under even more scrutiny on Tuesday morning as The Intercept’s Glenn Greenwald unloaded a major story about the network’s public relations officials–at the direction, clearly, of management–and is refusing to be transparent about a fake news scandal that has engulfed the network and tarnished one of journalism’s all-time great leaders, Carl Bernstein of Watergate fame.

In an explosive piece laying out the landscape of an ethical minefield through which CNN is navigating poorly, Greenwald in the headline of the story accuses CNN of lying to its audience in a piece authored by Bernstein; former Barack Obama administration official and CNN chief national security correspondent Jim Sciutto, and CNN researcher Marshall Cohen: “CNN, Credibly Accused of Lying to its Audience About a Key Claim in its Blockbuster Cohen Story, Refuses to Comment.”

As Breitbart News has reported, the entire core of the piece from July from Bernstein, Sciutto, and Cohen is entirely fake news. CNN reported, using anonymous sources, that Michael Cohen–President Trump’s former personal attorney who just pleaded guilty to a number of charges brought by the U.S. attorney for the Southern District of New York–was willing to testify that President Trump knew in advance of a summer 2016 meeting between several senior Trump officials and a Russian attorney with Kremlin links. Cohen’s own attorney, Lanny Davis, later undercut that narrative, publicly claiming on the record nearly a month later that it was not true. Then Davis admitted he was a source for the CNN story–and that he had provided inaccurate information to the network.

That is where Greenwald zones in on his story, raising “serious ethical and journalistic questions” about CNN’s “conduct” in handling this. While CNN refuses to answer whether it has other sources other than Davis to back up its claim–it appears to not have them–Greenwald writes that CNN’s claim in the original article about which Davis declined to comment, when he was, in fact, a source for the story on an anonymous basis, is extraordinarily troubling.

Here’s how Greenwald puts it:

Nonetheless, it’s possible that other sources did tell CNN that Cohen does have this information and intends to share it with Mueller, and that Cohen’s own lawyer is either unaware of this or is lying about it. It’s not likely, obviously, but it’s theoretically possible. Unfortunately, CNN refuses to tell us anything about what it itself said was a “blockbuster” story, so it’s impossible to know.

But there’s an entirely separate, and more significant, question about CNN’s behavior here; namely, the very specific claim they made about their sourcing for that blockbuster story. Last night, BuzzFeed reported that Davis explicitly confessed that he was one of the anonymous sources for CNN’s July 26 story, just as he was for the stories from the Washington Post and the New York Post. Last week, CNN put Davis on the air with Anderson Cooper to deny that he was the source for that CNN story – a denial Cooper did not contest – but Davis now admits he was one of CNN’s sources, if not their main source.

Yet remarkably, CNN, in its July 26 story, specificaly claimed that Davis refused to talk to CNN about the story or provide any comment whatsoever.

“How can CNN possibly justify refusing to address these questions, and refrain from informing the public about these critical matters on a story that they themselves hyped for days as a ‘blockbuster,’ one of the most significant stories yet in the Trump/Russia saga?” Greenwald wrote. “Questions about this massive discrepancy from the Intercept to Stelter have not been answered, nor has CNN addressed this on air or with any other media outlets who have inquired. [Oliver] Darcy told the Intercept he was not aware of sourcing issues on the story and suggested inquiries be directed to CNN’s Public Relations department.”

Greenwald goes on to write that if CNN did, in fact, lie about Davis refusing to comment when he was an anonymous source for the piece, which appears to be the case, this is “obviously a major journalism scandal.”

If, by contrast, Davis – who has been treated by the U.S. media as a reliable source despite decades of lying (and who leveraged that treatment to raise more than $150,000 in a GoFundMe “Truth Fund” campaign for Cohen to pay Davis) – is lying about having spoken to CNN about the July 26 report, that is also a major story.