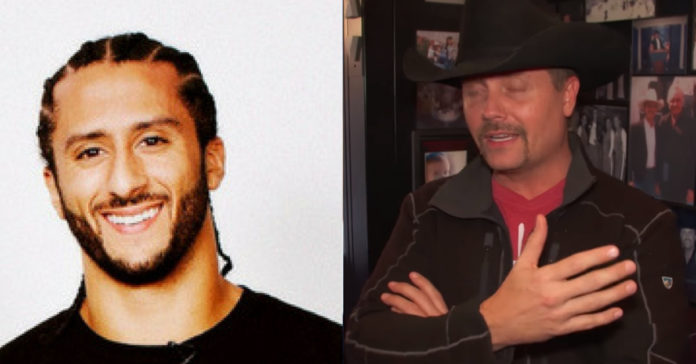 Nike just made an epic blunder and country superstar John Rich was on hand to remind them of the high stakes of hiring Colin Kaepernick.

As reported by Yahoo: Surely there will be a calm, rational, well reasoned response to this story.

Nike revealed, through ESPN’s Darren Rovell, that it is making Colin Kaepernick the face of its “Just Do It” 30th anniversary ad campaign.

The initial image, announced through Rovell, has a close up of Kaepernick’s face with the caption: “Believe in something. Even if it means sacrificing everything.”

It’s an interesting decision for Nike. No other athlete produces the same emotional response as Kaepernick. Some will rip Nike and claim they’ll never buy their products again. Others who support Kaepernick will gladly shift their dollars to Nike for its support of the former San Francisco 49ers quarterback, who is viewed as a hero to many for standing up for social issues even if it meant the NFL ultimately would freeze him out.

BREAKING: Nike had been paying Colin Kaepernick all along, waiting for the right moment. That moment is now, as he becomes the face of the company’s 30th anniversary of the “Just Do It” campaign. pic.twitter.com/uccpDStbq5

John Rich — one half of the country band Big & Rich — is FURIOUS at Nike for the mega deal it made with Colin Kaepernick … and says his sound guy is already planning on burning his Nike gear.

As we previously reported … Nike signed Colin as part of its “Just Do It” 30th anniversary campaign — a deal that includes a custom shoe, custom apparel and other Kaepernick-centric merchandise.

John Rich feels the deal is an insult to law enforcement — and points to the incident where Kaepernick wore a pair of socks featuring a pig dressed up in a police uniform. “Hey @Nike, if you’re gonna make the shoes, make the PIG SOCKS to match. Right? Cmon, people will LOVE that,” Rich tweeted. He also wrote, the deal “makes me sick.”

ICYMI … Colin wore those socks during training camp in 2016 when he was the 49ers QB. He later clarified, “I wore these socks, in the past, because the rogue cops that are allowed to hold positions in police departments, not only put the community in danger, but also put the cops that have the right intentions in danger by creating an environment of tension and mistrust.”

Kaep added, “I have two uncles and friends who are police officers and work to protect and serve ALL people. So before these socks, which were worn before I took my public stance, are used to distract from the real issues, I wanted to address this immediately.”

In addition, Rich says the band’s sound man “just cut the Nike swoosh off his socks. Former marine. Get ready @Nike multiply that by the millions.”

Our Soundman just cut the Nike swoosh off his socks. Former marine. Get ready @Nike multiply that by the millions. pic.twitter.com/h8kj6RXe7j