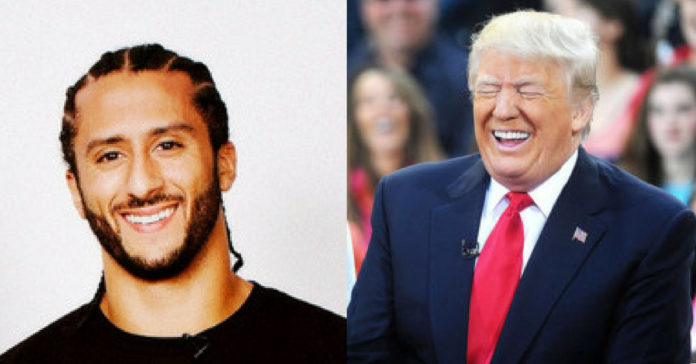 Colin Kaepernick is a fraud. John Elway proved that beyond a reasonable doubt when he revealed that contrary to reports he had in fact offered Colin a job with the Denver Broncos.

Colin turned it down but did not withdraw his lawsuit claiming he was blackballed. I guess no one explained that you can’t be blackballed if you have job offers.

So today comes word, not surprisingly, that Colin wants to cash in on his infamy with a new slogan he trademarked. Try hard to laugh.

As reported by The Mercury News:

Former 49ers quarterback Colin Kaepernick is staying busy as he waits for an arbitrator to decide if his collusion grievance against the NFL gets the go-ahead or a thumbs-down.

According to TMZ Sports, Kaepernick has filed in California to trademark the slogan, “I’m with Kap.”

Kaepernick pioneered the silent “take a knee” protest during the national anthem at NFL games in 2016 to spotlight social injustice. He opted out of his 49ers contract after the 2016 season and has had no luck hooking on with another NFL team.

Some NFL players have supported Kaepernick’s movement this exhibition season. Meanwhile the league has been unable to draft a policy that doesn’t alienate its players or their union, and/or satisfies the current dweller in the Oval Office.

“I’m with Kap” apparel is already on sale. In fact, Miami Dolphins players wore “I’m with Kap” T-shirts on the field before a game last September. Women’s and men’s T-shirts are on sale on Amazon.com (isn’t everything?). Tees are also available at Walmart, Etsy, Redbubble and TeePublic.

Having a trademark would allow Kaepernick to charge for any “I’m with Kap” merchandise. According to TMZ, “there’s some talk that major clothing brands, like Adidas and Puma” might be interested in a deal with Kaepernick.