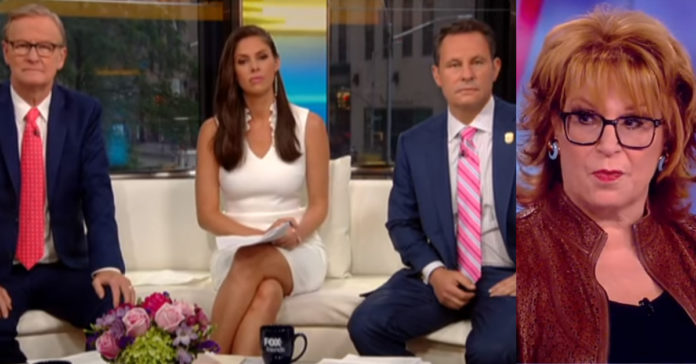 It’s official. Fox and Friends is losing one of their favorite hosts to ABC. Abby Huntsman, daughter of Ambassador Huntsman is going to fight the good fight with Whoopi and Joy Behar.

It seems Trump hating shrew Ana Navarro, a CNN contributor who never forgets to bash Trump and who worked for either Jeb or Marco when Trump steamrolled them, wanted the gig badly.

Seems ABC has some smart executives because teaming up Joy, Whoppi, and Ana would have been a disaster.

Huntsman, who currently co-hosts Fox & Friends Weekend, is set to replace Sara Haines, who announced her departure from the long-running ABC show last week to join the third hour of Good Morning America.

When reached for comment, Fox News confirmed this will be Huntsman’s last weekend hosting the Saturday and Sunday editions of the network’s flagship morning program.

Huntsman’s addition to The View will add a second conservative voice to the panel show, less than a year after ABC poached another rising star from Fox News, a network known to cultivate them: Meghan McCain. Former View host Jedediah Bila was also a contributor at Fox News before joining the ABC show.

It was reported last month that Huntsman, the daughter of U.S. Ambassador to Russia Jon Huntsman, was in talks to replace Haines. Also in the running, per reports, was Ana Navarro, a conservative commentator for CNN who frequently guest hosts The View.

It Begins: Hollywood Big Shots Start War With Fox News And They Will Lose

Lib Hollywood “Ladies” Defend Attacks On Sarah Sanders. “We were laughing our heads off here.”

Megan McCain Discusses Her Co-Hosts from ‘The View’. Your Jaw will DROP at What She Says About Whoopi and Joy.