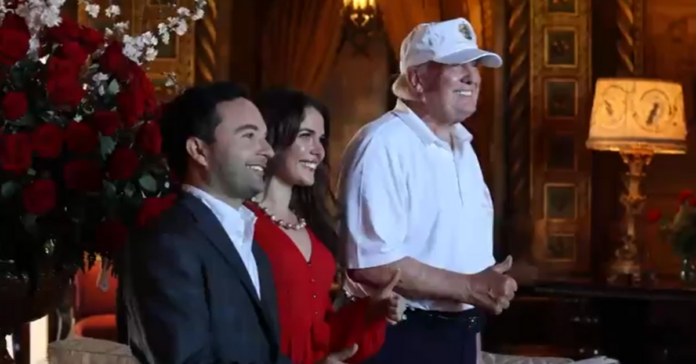 While the Democrats are introducing more showboat bills targeting former president Trump that have no chance of passing, Trump was doing what always Trump does – making people comfortable at his clubs.

He surprised some guests taking engagement photographs at Mar-a-Lago on his way out to play golf but not before someone caught the touching scene on camera and posted it on social media.

Brian Schottenstein and his fiancé were smiling for the camera when Trump surprises them. “Hey!,” he said as he looked over at Trump. “Hi!,” his fiance said.

“That’s a good looking couple,” Trump said before asking them, “Everything good?” They asked for a picture and Trump complied and shared a few words before leaving.

Meanwhile, House Democrats were doing this. From IJR:

House Democrats are introducing a bill that would prevent former presidents who have been impeached twice from being buried in Arlington National Cemetery.

The “No Glory for Hate Act,” which was introduced on Thursday, would also ban federal funds from being used to commemorate “twice impeached” former presidents.

The bill would prevent the ability to “create or display any symbol, monument, or statue commemorating any former President that has been twice impeached” on “Federal public land, including any highway, park, subway, Federal building, military installation, street, or other Federal property.”

Fun day with @ToriaAronoff at Mar-a-Lago taking engagement photos. Our friend @POTUS45 came in for a couple too. pic.twitter.com/2j1E6aYhk5

JUST IN: House Dems have introduced a bill to ban “twice impeached presidents” from burial at Arlington National Cemetery and federal funds from going to buildings displaying their names or acknowledging their achievements

This bill is called the "No Glory For Hate Act" pic.twitter.com/o3Y9n7qJUi