Update:  Now Anderson Cooper has removed the tweet and says he was “hacked”.  We shall see.  It sounds like he’s suffering from a little bit of Tweeters remorse to me.

CNN, the f*ke news leader and ratings loser does not even pretend to be unbiased new reporters anymore. Their ratings have dropped so low that.

Anderson Cooper, being the impartial, professional “journalist” that he is, took a huge pot shot at President Trump on Twitter this morning, calling the president of the United States a pathetic loser.

Someone from CNN calling the president a loser is a bit ironic.  Maybe Anderson hasn’t checked his ratings lately.  Maybe he doesn’t even know how.

Here’s how CNN did last week:

Oh wait they didn’t even make that Prime Time list.  Here’s another one: 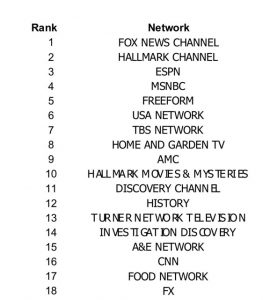 source: basic cable ranker** That’s right, for the week of December 04, 2017, CNN came in 16th, just below A&E and just above The Food Network.  FOX News remains at number 1.

Trump supporters may get a kick out of this video.  Here is Dr. Sebastian Gorka calling Anderson Cooper out for his F*KE NEWS reporting.  They don’t call Gorka Trump’s pitbull for nothing.  Enjoy and please SHARE!