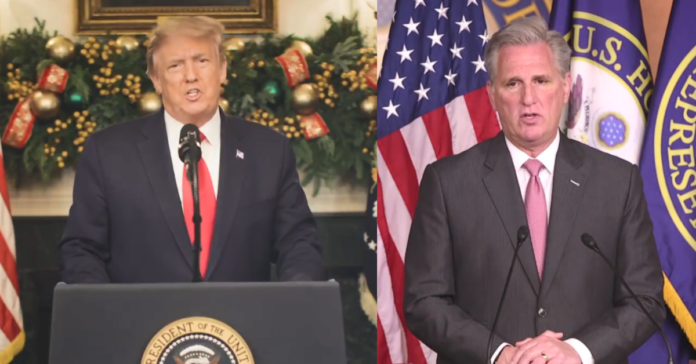 The backlash against the debacle in the Capitol continues. Corporate America is now moving to cut ties with Trump and the GOP members who voted to overturn the election.

Now, Corporate America is responding to the debacle by cutting off campaign funding to anyone involved.

It should be noted that some companies are also halting payments to the Dems as well but most of the movement is against the GOP.

The goal seems to be to make Mitch McConnell and Kevin McCarthy disciple their members who voted to overturn the election after a mob stormed the Capitol.

“Last week’s attempts by some congressional members to subvert the presidential election results and disrupt the peaceful transition of power do not align with our values,” said American Express’ CEO Steve Squeri, in an email to employees.

A growing number of Wall Street banks and businesses have cut ties with President Donald Trump’s campaign and financial arms, as well as the broader Republican Party, following last week’s riots and insurrection at the U.S. Capitol.

The financial technology company Stripe has stopped processing payments for the Trump campaign, according to a person familiar with the matter who requested anonymity because the decision hasn’t been made public.

The move would cut off Trump’s fundraising arm from what has been a steady stream of small-dollar donations that are often solicited through emails and text messages. Stripe’s decision was first reported by the Wall Street Journal.

American Express and JPMorgan Chase have said they would no longer donate to candidates who supported last week’s insurrection or did not vote to confirm President-elect Joe Biden’s victory in the Electoral College.

Hotel giant Marriott International, the health insurance network Blue Cross Blue Shield, bank holding company Commerce Bancshares and Citibank, all told Popular Information, a political newsletter run by ThinkProgress founder and editor Judd Legum, that they will stop donating to any member of Congress who objected to the certification of the Electoral College vote.

Popular Information surveyed 144 corporations that had, through their corporate PACs, donated to one or more of the eight senators who opposed the certification of President-elect Joe Biden’s win.

In addition to the vows to indefinitely suspend donations, Bank of America, Ford Motor Co. and AT&T all said they will take recent events into consideration before making future donations, while CVS Health Corp., Exxon Mobil, FexEx and Target said they are reviewing their political giving.

Marriott’s PAC donated $1,000 to the campaign of Sen. Josh Hawley (R-MO) during the 2020 cycle and another $1,000 to Hawley’s leadership PAC, but the company told Forbes it will “pause” donations to those who voted against certification, including House members.

Blue Cross Blue Shield’s PAC, known as BLUEPAC, donated nearly $12,000 in total to Tommy Tuberville (R-AL), Roger Marshall (R-KS) and Hawley in the 2020 cycle, but told Popular Information it is suspending support to all 147 Republicans who voted “to subvert the results of November’s election by challenging Electoral College results.”

Commerce Bancshares donated $2,500 to Marshall during the 2020 cycle, but told Popular Information it has “suspended all support for officials who have impeded the peaceful transfer of power.”

Citibank’s also announced Sunday afternoon that it will “not support candidates who do not respect the rule of law” and will “pause contributions” to the GOP members who objected, according to an internal memo obtained by Business Insider.