If you are a Trump supporter and don’t know Malik Obama by now, then I know one thing about you. You don’t go on Reddit. Malik Obama, yes he’s Barack’s brother, is one of the biggest Donald Trump supporters on Reddit and Twitter. Malik attended one of the debates during the election as the guest of then Mr., now President Trump, and his posts often top Reddit “The_Donald,” a sub Reddit group.

Reddit is a American social news, aggregation, web content rating, and discussion website. Reddit’s registered community members can submit content, such as text posts or direct links. Registered users can then vote submissions up or down to organize the posts and determine their position on the site’s pages.  (Source: Wikipedia)

You can tell from his tweets and Reddit posts, that Malik genuinely loves his brother, but he may not have as much respect for him as he once did.

You will notice that the the liberal media always makes a big point of “pointing out” that Malik is Barack Hussein’s HALF brother, versus a “whole brother.” They probably do this to distance Barack Hussein from his brother, since he doesn’t always agree with the US President. I say “half brother-all brother, half sister-all sister.” My youngest sister is technically my half sister, but I think I would be hurt if she introduced me as her “half brother.” KEEP READING……

Everyone knows about the Clinton Foundation and their numerous instances of Pay-for-Play, influence peddling, and flat out selling favors from the US State Department to the highest bidder. Well, it seems that Barack and Michelle Obama may be taking a page straight from the Bill and Hillary Clinton playbook, even before they left the White House.

In October, Malik tweeted this photo of a check he accidentally received. Malik runs a small foundation named after his late father. Obviously, the the check was sent to the wrong “Obama Foundation”. Opps! HA! HA! HA! 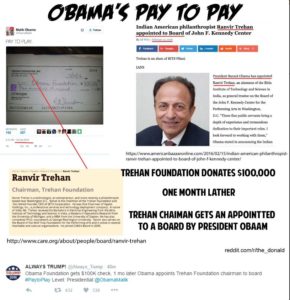 “I love President Obama, because he is my brother, but Obama is a hypocrite. He is not helping us at all. Obama has done nothing for this family for the last eight years. We have been waiting for his help in vain.”  M. Obama 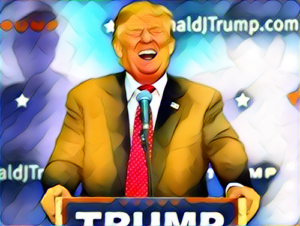 businessman appears to have “donated” $100,000 to the Obama Foundation, in exchange for a seat on the board of the Kennedy Center. This is a very prestigious seat among Hollywood bigwigs and Corporate titans, and it is a seat that happens to be appointed by Barack Obama. Is this just a coincidence? We’ll never know for sure, but it seems pretty fishy.

The Crooked Mainstream Media will NOT show this, so SHARE this everywhere Trump fans! We’re running out of time!