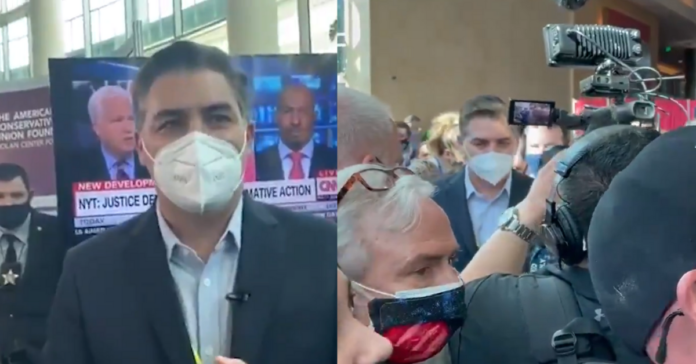 CNN’s Jim Acosta showed up at CPAC today to cover the event and he immediately attracted a crowd. They played along with Jim and took selfies with him but still got a few swipes in at asking him about Cuomo and chanting CNN sucks at one point.

Conservative activist Kaitlin Bennett asked him if he disavows the rioters and murders? “I disavow all violence, for sure. No question,” Acosta said. (See video below)

A reporter for the Federalist asked Jim about New York Governor Andrew Cuomo and watched Jim dodge the question.

Tom Cotton gave a blistering response to the New York Times controversy when he spoke today.

“If the police cannot, or especially, if they are not allowed to restore order, then it is time to send in the troops,” Cotton said, repeating the message of his op-ed.

“What happened next? Total meltdown with the little social justice warriors at The New York Times. All these children, they’ve been marinated in the language of the campus seminar room. They said things like, ‘Your words put my life at risk,’” Cotton said.

“As if typing on their phones, sitting on futons was as dangerous as being a cop trying to stop rioters in the streets.”

“I’m sorry kiddo, words are words. Violence is what your friends are doing out on the streets of America,” Cotton said. “Of course the New York Times editors, they caved and rolled over and apologized. They said my work didn’t meet their standards. That’s one time I actually agree with the New York Times, my work did not meet their standards, it far exceeded their normally lousy standards.”

“I will never apologize for defending America,” Cotton said. “The New York Times is a laughingstock, obviously. But this is no laughing matter.”

CNN’s Jim Acosta is confronted at CPAC about his network’s refusal to cover the various scandals of Gov. Andrew Cuomo
pic.twitter.com/xlBywY8tLZ