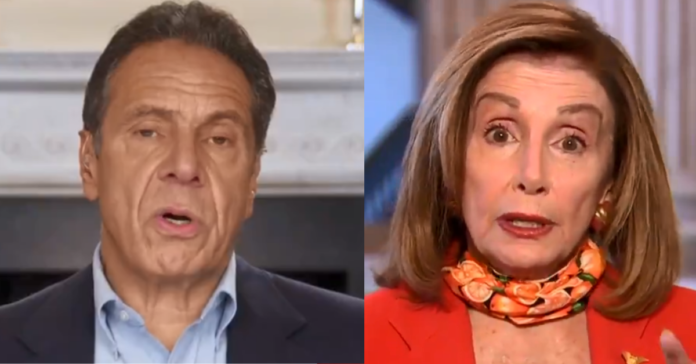 New York Governor Andrew Cuomo just committed political suicide in the Dem Party and admitted his creepy behavior was insensitive and ‘misinterpreted as an unwanted flirtation.’ He is done in the Dem Party with that admission in today’s world and he knows it. Do not be surprised if the media and the Dems pile on him to see Trump come to his defense. Pelosi dropped the hammer on him as well calling the accusations credible.

Cuomo issued a statement and while he apologized he did kind of blame the victims. He said: “Questions have been raised about some of my past interactions with people in the office.

“I never intended to offend anyone or cause any harm. I spend most of my life at work and colleagues are often also personal friends. At work sometimes I think I am being playful and make jokes that I think are funny. I do, on occasion, tease people in what I think is a good natured way. I do it in public and in private.

“You have seen me do it at briefings hundreds of times. I have teased people about their personal lives, their relationships, about getting married or not getting married. I mean no offense and only attempt to add some levity and banter to what is a very serious business.

“I now understand that my interactions may have been insensitive or too personal and that some of my comments, given my position, made others feel in ways I never intended. I acknowledge some of the things I have said have been misinterpreted as an unwanted flirtation. To the extent anyone felt that way, I am truly sorry about that.

“That’s why I have asked for an outside, independent review that looks at these allegations.

“Separately, my office has heard anecdotally that some people have reached out to Ms. Bennett to express displeasure about her coming forward. My message to anyone doing that is you have misjudged what matters to me and my administration and you should stop now – period.”

The California representative joined a chorus of Democrats calling for a truly independent probe into the accusations of misconduct lodged against Cuomo by two of his former staffers.

“The women who have come forward with serious and credible charges against Governor Cuomo deserve to be heard and to be treated with dignity,” Pelosi said in a statement.

“The independent investigation must have due process and respect for everyone involved.”

The statement came as Cuomo, 63, agreed to let state Attorney General Letitia James appoint an outside investigator into the growing scandal.

The move quickly drew bipartisan criticism, however, both because Cuomo was trying to dictate his own investigation, and because Jones previously worked with lawyer and key Cuomo advisor Steve Cohen.