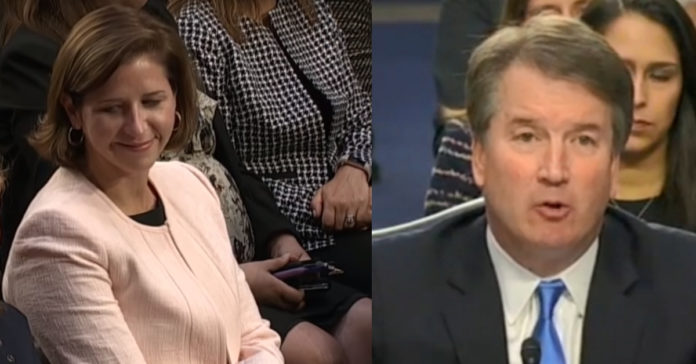 This will make you sick. What type of people would attack an innocent woman in this manner?

To scare her and her kids -which some clowns are also doing to Kavanaugh’s accuser – is beyond the pale in both instances.

The inmates are running the asylum. As reported by The Daily Caller:

The wife of Supreme Court nominee Brett Kavanaugh has received a battery of death threats in recent days, after allegations appeared in the press that the judge sexually assaulted Christine Blasey Ford in 1982.

The vivid missives are just one iteration of the inflamed rhetoric surrounding Kavanaugh’s nomination to the high court, following Ford’s accusations. The Ford family has similarly been threatened.

“May you, your husband and your kids burn in hell,” one message to Ashley Kavanaugh read.

Another told Mrs. Kavanaugh to put a bullet in her husband’s skull.

The Wall Street Journal obtained the emails on Thursday, which were delivered as federal law enforcement tracks an uptick in threats against Judge Kavanaugh and his family. The messages were sent to Ashley Kavanaugh’s work email address. The U.S. Marshals Service is pursing the matter.

The Kavanaugh family has drawn intense media attention since Ford’s accusations were publicized Sunday in the Washington Post. Ashley Kavanaugh delivered cupcakes to a gaggle of reporters stationed outside their home on Tuesday.