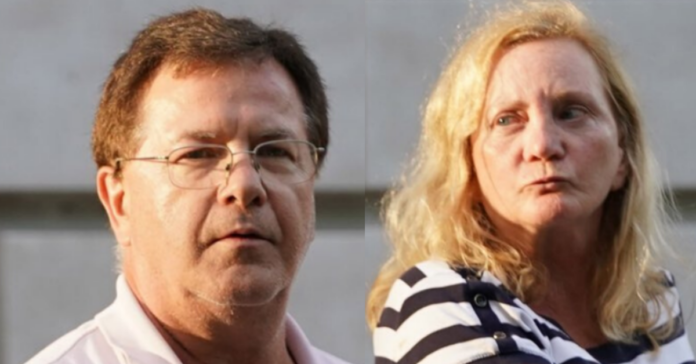 The St. Louis couple who went viral during a protest march and are facing two felony charges pleaded not guilty today.

Mark and Patricia McCloskey entered the not guilty plea on two charges – unlawful use of a weapon and tampering with evidence.

The McCloskey’s are lawyers so while the charges carry jail time and fines losing their licenses to practice law would be the most severe punishment they may face.

Trump has been monitoring the case. Missouri Gov. Mike Parsons has also and he can pardon the couple should the unlikely – they be found guilty – happen.

“Every single human being that was in front of my house was a criminal trespasser,” McCloskey said when the charges were announced.

“They broke down our gate. They trespassed on our property. Not a single one of those people is now charged with anything. We’re charged with felonies that could cost us four years of our lives and our law licenses.”

Joel Schwartz, attorney for the McCloskeys, has accused St. Louis circuit attorney Kim Gardner of politicizing the prosecution and noted that Gardner has highlighted the case in her reelection bid.

But Gardner has remained steadfast in her advancement of the case. In August, the circuit attorney told liberal-leaning Mother Jones that the McCloskeys had chosen “to stoke the racial fear and divide in a community for no reason.”

The case now proceeds to pretrial motions on Oct. 28. Regardless of the verdict, the McCloskey’s have several high-powered Republicans in their corner who are likely to keep the couple from facing any time in prison.

Following the hearing today, Schwartz said President Trump “semi-frequently” calls the couple, and has previously stated he will pardon the McCloskeys if it comes to that.

“We’ll let it play out and see how this all comes out in the courts, but I stand by what I said,” Parsons said.