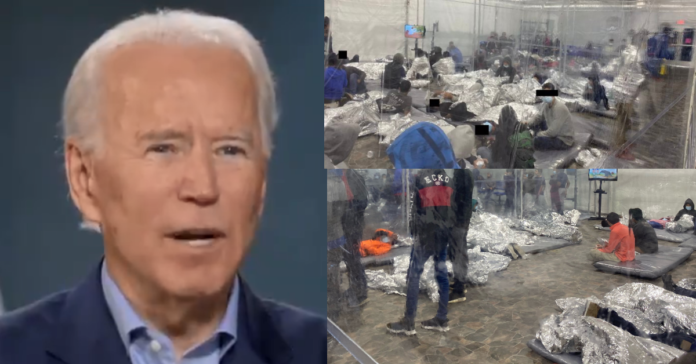 Joe Biden is in trouble at the border and the cracks are starting to show in the Dem’s united front to protect Biden. How bad is it getting for Biden?

A Dem Rep from Texas just put him on notice and leaked photos of the crisis and not surprisingly the pictures look similar to what Trump got crucified in the media for.

The pictures look the same but the media coverage is totally different and that is just one of the many reasons the media has lost credibility with the public.

Because they play games to score points for the side they align with – conservative media does it too but nowhere near the scope or scale of the mainstream media.

Rep. Henry Cuellar (D-Texas) broke with Biden earlier over the crisis at the border because his district of directly affected by it.

It appears no one is listening to him because he leaked the photos after the Biden admin restricted media coverage of the housing facilities.

Exclusive photos from inside a U.S. Customs and Border Protection temporary overflow facility in Donna, Texas, reveal the crowded, makeshift conditions at the border as the government’s longer-term child shelters and family detention centers fill up.

Why it matters: Each of eight “pods” in the so-called soft-sided facility has a 260-person occupancy, said Rep. Henry Cuellar (D-Texas), who provided the photos to Axios to raise awareness about the situation. But as of Sunday, he said, one pod held more than 400 unaccompanied male minors.

Because the Biden administration has restricted media coverage at housing facilities, images like these offer a rare window into conditions.

Cuellar, who recently visited a shelter for children, did not tour the Donna facility or take the photos himself. He said the photos were taken over the weekend.

What they’re saying: Cuellar described the setting as “terrible conditions for the children” and said they need to be moved more rapidly into the care of the Department of Health and Human Services.

Border Patrol agents are “doing the best they can under the circumstances” but are “not equipped to care for kids” and “need help from the administration,” he said.

“We have to stop kids and families from making the dangerous trek across Mexico to come to the United States. We have to work with Mexico and Central American countries to have them apply for asylum in their countries.”