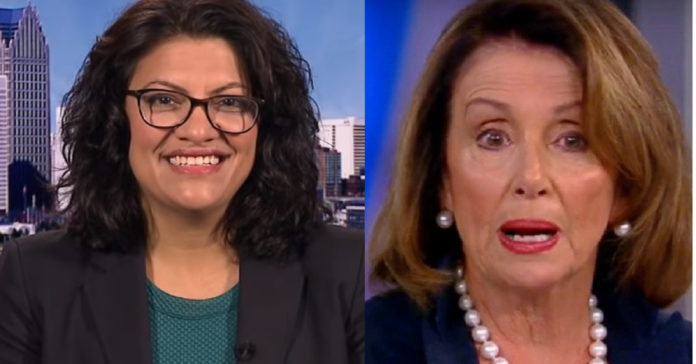 Nancy Pelosi has a long history of selling out America that the media simply refuses to report.

Look, it’s not just Pelosi (who if you don’t know owns a Napa Valley vineyard) who has padded her fortune through public service.

They all do – that is why Trump won. This isn’t GOP or Democrat thing, it is simply what has been going on for far too long.

We elected Trump to fix it and he is. Trump spoke truth to power and like most great leaders his words and actions are contagious.

Tlaib first disregarded an inquiry from CNN’s Poppy Harlow about whether Pelosi had become a Democratic “sellout” because of her support of big banks, prompting Harlow to  ask the candidate if she thought Pelosi was disconnected from her constituents’ concerns.

“I think so,” Tlaib responded.

Tlaib spoke to CNN “New Day” host John Berman last week about those she has deemed sellouts in the Democratic Party, but also refused to name names at that time. During her campaign, Berman noted she spoke about “changing the Democrat party” and “getting rid of Democratic sellouts.”

The candidate, who has received support from New York congressional candidate Alexandria Ocasio-Cortez, is poised to become the first Muslim woman elected to Congress after winning the Democratic nomination for Michigan’s 13th Congressional District on Aug. 7. She is running to replace former Rep. John Conyers Jr. (D., Mich.), who announced his resignation amid controversy last year, and she is unopposed in the general election.

Tlaib cited Pelosi’s seemingly apathetic attitude toward some of the poorest districts in the country as reason for pulling her support of the longtime Democratic leader.

“Look, I come from a district that doesn’t feel like they’ve been heard by Congress,” Tlaib said. “It has overwhelmingly been ignored on a number of fronts.”

Tlaib blamed both Republicans and Democrats for removing financial transparency requirements set forth by the Dodd-Frank Act. She said these protections were critical for working-class families in her district and other low-income areas of the country. This is the second time in the past week Tlaib has expressed her disapproval of Pelosi and advocated for a change in leadership.