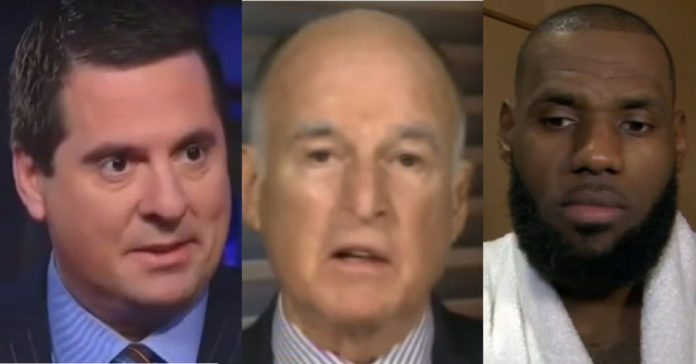 The left loves to hate Devin Nunes and the right thinks he is the firewall protecting President Trump from an overzealous witch hunt.

But what gets lost in the spotlight that is shining on Nunes is that Devin is actually a pretty funny guy.

Nunes, the chairman of the House Intelligence Committee, retweeted the message the party sent to James, a notable Hillary Clinton supporter and Trump critic, after the three-time champion decided to leave the Cleveland Cavaliers.

Nunes (R-Tulare) said on Twitter that James should have “held out” on his contract until he was exempted from Gov. Jerry Brown’s (D-Calif.) “weather tax.”

“[Laugh out loud]. Prepare to pay the highest taxes you ever have in your career,” Nunes said. “You should have held out for more just to afford the Moonbeam weather tax.”

James, 33, is a regular critic of President Donald Trump, calling him a “bum” for revoking a White House invitation to Golden State Warriors champ Stephen Curry.

LOL! Prepare to pay the highest taxes you ever have in your career!! You should have held out for more just to afford the Moonbeam weather tax!!! https://t.co/O6gZXFqZqM

Not bad Devin Nunes. Not bad at all.