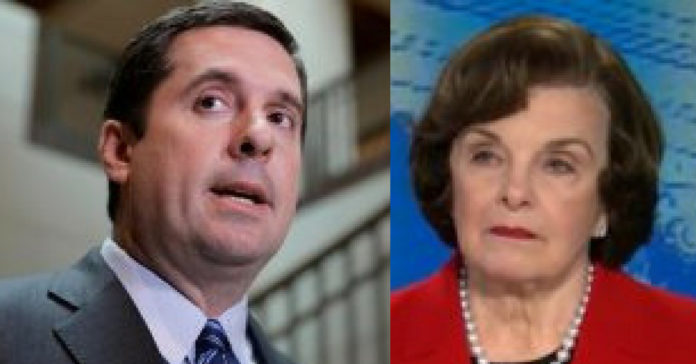 Devin Nunes is furious and he should be. Think for one minute about what happened with Dianne Feinstein and her long-time Chinese spy driver.

Why is that not the biggest scandal? Why because Trump didn’t do it, so the FBI doesn’t care… but Devin wants equal treatment for Trump and he is going to get it.

House Intelligence Committee Chairman Devin Nunes accused the FBI of “drastically” deviating from standard operations by refusing to give the Trump campaign a defensive briefing on Russian interference in the 2016 election.

As an example, the California Republican pointed out that Sen. Dianne Feinstein, D-Calif., was briefed amid concerns that one of her staff members was possibly working as a Chinese spy.

“Providing a defensive briefing, like the one given to Sen. Feinstein, is a typical response to these kinds of situations,” Nunes said in a statement to Fox News. “The refusal to give the Trump campaign a defensive briefing, and instead opening a sprawling counterintelligence investigation of American citizens, is one of many alarming ways that intelligence leaders drastically diverged from normal procedures in their Trump campaign investigation.”

In recent days reporting emerged that said Chinese intelligence officials recruited a staff member at Feinstein’s local office to provide them with details on local politics. Feinstein said she was notified five years ago about the concerns and subsequently removed the staffer.

“Five years ago the FBI informed me it had concerns that an administrative member of my California staff was potentially being sought out by the Chinese government to provide information,” Feinstein said in a statement. “He was not a mole or a spy, but someone who a foreign intelligence service thought it could recruit.”

“He never had access to classified or sensitive information or legislative matters,” Feinstein added. “The FBI never informed me of any compromise of national security information.”