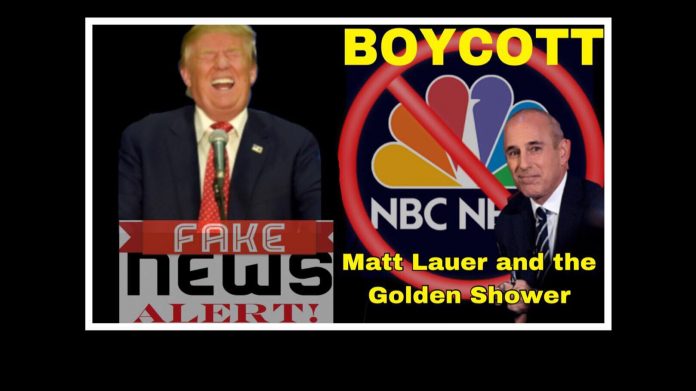 A NEW Low For NBC

If you watched the NBC’s TODAY Show this morning, you may have seen President-elect Donald Trump’s Chief of Staff Reince Priebus, being interviewed by Merideth Viera, and one of the finest investigative journalists this country has ever seen. Ha Ha…Just Kidding. It was Merideth, and Left-wing liberal low-life Matt Lauer interviewing Priebus.  (VIDEO BELOW)

Before you watch Mr. Tough guy Matt Lauer grilling Priebus, I have to tell you what they are talking about first. It is ridiculous and despicable, and you won’t like it, but you need to know before you watch. This guy has some nerve. I don’t know how Reince Priebus was able to keep from losing his temper. This is just shameful.

Yesterday, Buzzfeed wrote an article about a 35 page document that was given to the US Intelligence Services. Since then, Buzzfeed has admitted that the document is not true, and numerous other publications including the New York Post have come out stating that this is all bogus “fake news”. Yet, Lauer treats it seriously, and almost gives Priebus the third degree.

OK, here’s the disgusting part. This 100% BS document says that Donald Trump rented a hotel room that Barack and Michelle Obama had slept in before, and hired a bunch of hookers to urinate all over themselves, and the bed, (known as a golden shower) in front of Trump. Well, there you have it. You can’t make this sh*t up folks.  Please watch and tell us what you think of Matt Lauer now. 🙂

In case you want to learn more about this bogus story here’s another video….

The dishonest Liberal Media will KEEP spreading this disgusting FAKE NEWS.  Please SHARE this with everyone you know.  It’s up to us to get the truth out Patriots!