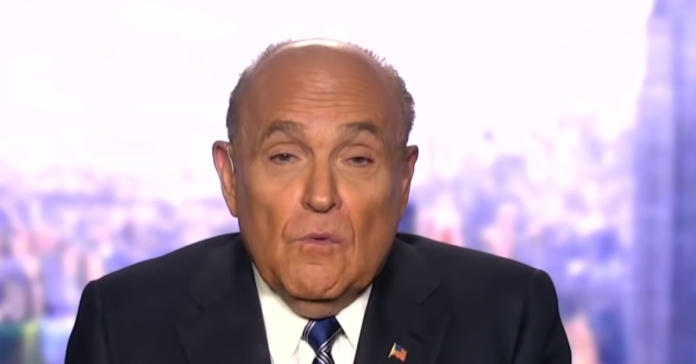 “For Dominion, whose business is producing and providing voting systems for elections, there are no accusations that could do more to damage Dominion’s business or to impugn Dominion’s integrity, ethics, honesty, and financial integrity,” the lawsuit says. “Giuliani’s statements were calculated to — and did in fact — provoke outrage and cause Dominion enormous harm.”

“Dominion brings this action to set the record straight, to vindicate the company’s rights under civil law, to recover compensatory and punitive damages, and to stand up for itself, its employees, and the electoral process,” the lawsuit says.

“Having been deceived by Giuliani and his allies into thinking that they were not criminals — but patriots ‘Defending the Republic’ from Dominion and its co-conspirators — they then bragged about their involvement in the crime on social media,” the lawsuit said blaming Rudy for the debacle in the Capitol.

This is not good for Rudy who could very well be bankrupted by this lawsuit.

The lawsuit seeks more than $1.3 billion in damages for the voting machine company, a target for conservatives who made up wild claims about the company, blaming it for Trump’s loss and alleging without evidence that its systems were easily manipulated.

Dominion is one of the nation’s top voting machine companies and provided machines for the state of Georgia, the critical battleground that Biden won and which flipped power of the U.S. Senate.

The company faced such a mountain of threats and criticism that one of its top executives went into hiding.

The suit is based on statements Giuliani made on Twitter, in conservative media and during legislative hearings where the former mayor of New York claimed the voting machine company conspired to flip votes to President Joe Biden.

Dominion’s lawsuit, filed in federal court in the District of Columbia, is among the first major signs of fallout for the former president’s allies and the failed effort to subvert the 2020 election that ended with a Jan. 6 riot at the U.S. Capitol by a pro-Trump mob that claimed the election had been stolen.