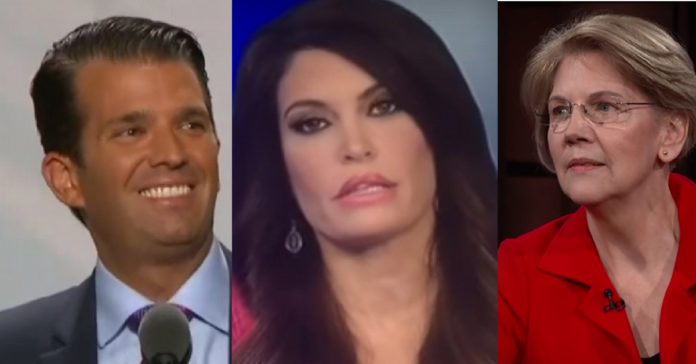 This is funny and should serve as a lesson to the left – what goes around comes around. Karma, as they say, is a fickle mistress and she just turned on Elizabeth Warren.

Turns out Kim has some native American blood in her causing Don Jr to come forward and embarrass the hapless Warren with a hilarious bet.

According to the tests, 6.1 percent of Kimberly Guilfoyle’s DNA is “East Asian and Native American,” with 5.3 percent definitely Native American and the rest possibly either.

The posting of the results by the conservative site Twitchy prompted the presidential son, who has been widely reported as dating Ms. Guilfoyle, to engage in some snark at Ms. Warren’s expense and for the benefit of a Native American charity.

“I’ll make this interesting. I’ll bet @SenWarren $10,000 to a Native American charity that @kimguilfoyle is more Native American than she is. [Let me know],” he wrote on Twitter.

No word yet from Warren as to whether she will accept the bet, my guess she will run away as fast as she can.