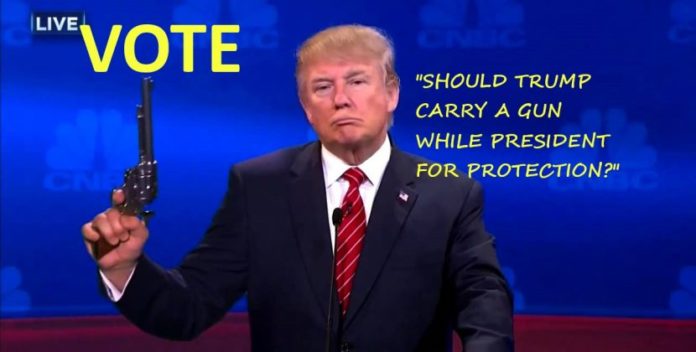 Please VOTE BELOW and let us know what you think.

Throughout Trump’s campaign, he has said that armed citizens could have stopped shootings in San Bernadino, Chattanooga, and Orlando. Of the massacre at the nightclub, where guns were not permitted, the candidate said, “if you had guns on the other side, you wouldn’t have had the tragedy that you had.”

“Gun and magazine bans are a total failure.”

Mr. President Elect says that ”law-abiding citizens should be allowed to own the firearms of their choice.”

“The right of self-defense doesn’t stop at the end of your driveway … A driver’s license works in every state, so it’s common sense that a concealed carry permit should work in every state.”

“I have the endorsement of the NRA which I’m very proud of, these are very, very good people and they’re protecting the Second Amendment.”

THANK YOU FOR PARTICIPATING IN OUR POLL. Encourage others to Vote, will you please SHARE so everyone can be heard.