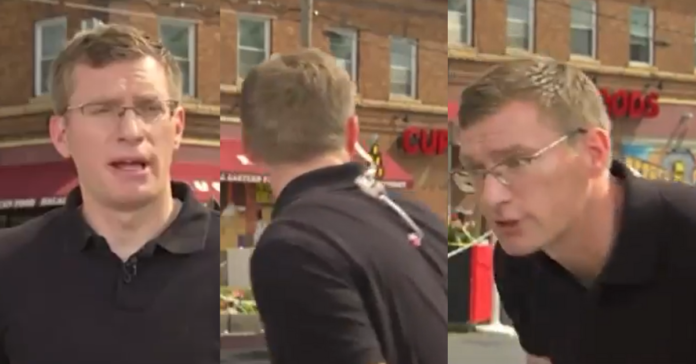 Minneapolis police responded to a report of shots fired near George Floyd Square – where George Floyd died one year ago to the day – that was captured on live television by a reporter. The suspect is believed to have fled the scene authorities said.

“Information received from callers was that a suspect vehicle was last seen leaving the area at a high rate of speed,” Minneapolis Police Department (MPD) spokesperson John Elder said before adding that one person checked himself into the hospital and is in critical condition that could be related.

AP reporter Philip Crowther reported, “Shots appear to have been fired at George Floyd Square. Quiet now. People still sheltering in place. We heard a few dozen sounds of what appear to have been shots fired on this block. Everyone sheltered in place. Lots of running. No apparent need for medics. Will update.

He added, “From our vantage point we see one broken window, apparently from one of the shots fired.

“Consensus among reporters here at George Floyd Square was that we heard anywhere between a dozen and two dozen shots fired.

“George Floyd Square very quiet again now. But a fellow reporter just had her phone smashed because she took photos of a storefront hit by a bullet.”

At least one person was shot Tuesday when gunfire erupted in George Floyd Square in Minneapolis on the one-year anniversary of the police-custody murder.

Minneapolis police confirmed to USA Today that one person had been shot and 911 callers reported a suspected gunman fleeing in a vehicle “at a high rate of speed.”

“This is an evolving incident,” police spokesperson John Elder said in a statement to the outlet. “No further information is available at this time.”

Footage taken by the Associated Press recorded nearly 30 loud bangs around 11 a.m. at the intersection where Floyd died, 38th Street and Chicago Avenue.

Quick rough footage of the moment we heard shots fired at George Floyd Square. We counted 30 upon looking back at the footage. pic.twitter.com/oxGkLQru9Q