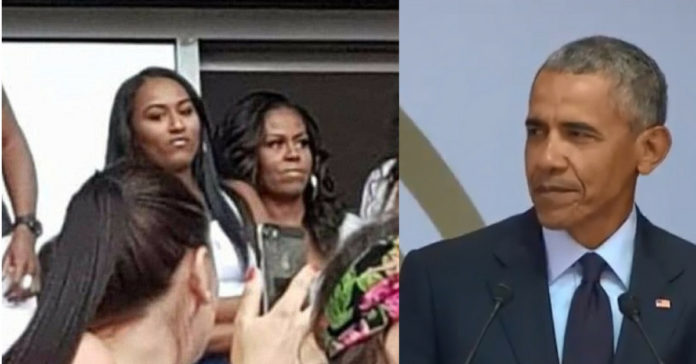 You just know Malia and Sasha Obama were embarrassed, to say nothing for the rest of us after a video surfaced that showed Barack and Michelle Obama getting down at a Jay – Z concert.

More decorum is what is needed from our leaders, both former and current, not less.

Barack and Michelle Obama broke it down at Beyoncé and Jay-Z’s concert Saturday just outside of Washington ― and fans couldn’t handle it.

Attendees captured the former first couple dancing to Jay-Z’s 2011 hit “N***as in Paris” during the second of two On the Run II tour shows this weekend at FedEx Field in Landover, Maryland.

To each his own but it is important to note that the Obama’s still represent us on the world stage – part of the job – and they should let their teenage daughters act like the teenagers in the family.

Obamas Officially Sign With Netflix. Get Ready ready for the BACKLASH