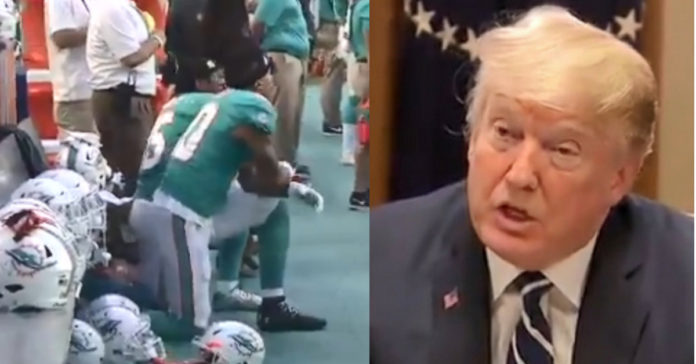 ESPN caves in a stunning announcement that is sure to annoy most Americans. Look, this is not a complicated issue – we are all Americans and we would all be well served to spend a few seconds here and there remembering that.

Remembering all who have sacrificed to make this the greatest country on earth.

That means you too NFL players. As reported by The Daily Mail:  The new president of ESPN announced on Friday that the network would no longer televise the national anthem during Monday Night Football this season.

ESPN President Jimmy Pitaro shared the news with reporters at a media event at the company’s campus in Bristol, Connecticut.

Pitaro, who was hired on March 15 following the resignation of John Skipper, shared that the network had not previously shown the anthem and did not plan to start doing so, Axios.com reports.

He further clarified that ESPN was not a political organization but assured that politics would be covered as they pertained to sports.

‘It’s not our job to cover politics, purely, but we’ll cover the intersection of sports & politics,’ he said.

‘When something happens, when the Eagles disinvited from White House, or when someone takes a knee, if we think newsworthy were going to cover it.’

The network currently shows regular season games for Monday Night Football, a wild-card round and the Pro-Bowl.

ESPN Senior Vice President for Event & Studio Production Stephanie Druley explained to reporters that the network’s position on showing the anthem ‘has always been our standing operating procedure.’

The news comes as the NFL the players’ union work to announce a season policy for kneeling after the league backtracked on an order that players must stand at attention during the playing of The Star-Spangled Banner or remain in the locker room.

Players and teams that refused to honor the new rules were looking at steep fines.

President Donald Trump blasted the ‘$40,000,000 commissioner’ of the NFL Roger Goodell for failing to stop the movement in his July tweet, which came a day after the NFL said it was indefinitely suspending it anthem rules.

So far in the NFL preseason, more than 15 players – including Oakland Raider’s Marshawn Lynch – have participated in some form of action while the anthem played.