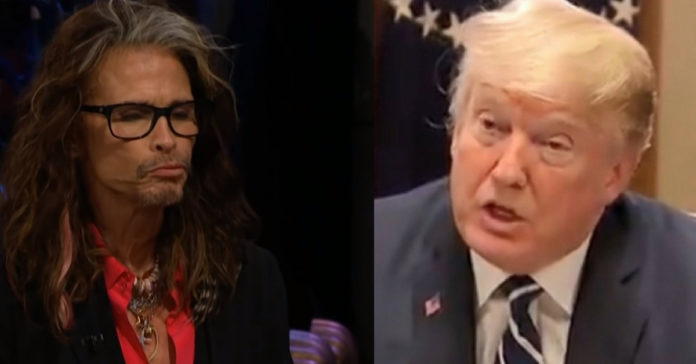 Hollywood and the creatures that live out there will never, ever learn. They do it every time and it always backfires.

Which is just what happened to Steven Tyler and Aerosmith. Tyler, all of a sudden, is demanding that President Trump stop using one of their songs at his rallies?

Enter the fans who sent him a devastating response.

From The Conservative Tribune:

Steven Tyler fans are a die-hard bunch, but his rock-star lifestyle and two first names weren’t enough to calm some upset fans this week after a decidedly un-rock-and-roll move.

The man who “snorted half of Peru” sent a cease-and-desist to President Donald Trump for playing his music.

While playing Aerosmith’s “Livin’ on the Edge” in West Virginia this Tuesday, Trump apparently gave “the false impression” that Steven Tyler has given his consent for the use of his music, according to the letter sent by his attorney.

Fans were quick to roast Tyler for his reaction, piling onto Twitter with some searing memes.

Many fans expressed their disappointment. Despite Steven Tyler’s insistence that it wasn’t a political move, they weren’t buying it.

#DoneWithAerosmith began trending on Twitter, and some even began to dredge up the nauseating stuff supposedly in Steven Tyler’s past.

And well he should. I had forgotten about his dalliances with a 14 year old when he was in his late 20's. He's a pedophile and a lot of other's who didn't know are finding out about his sordid past. He should have kept his over sized mouth shut. #DONEWithAerosmith

Don't kid yourself Steven, it's definitely political! If I wasn't #DONEWithAerosmith, I'd suggest all of us patriots synchronized playing "Living on the Edge" at our next rally I prefer Kid Rock, Ted Nugent, or any band that doesn't squeal like a lil b××ch! #TrumpTrain #POTUS45 https://t.co/hOB1WGhqZu

Confused why you don't want your former fans to listen to your music? Too many enhancers? Your brain? pic.twitter.com/fmfUSQS1il