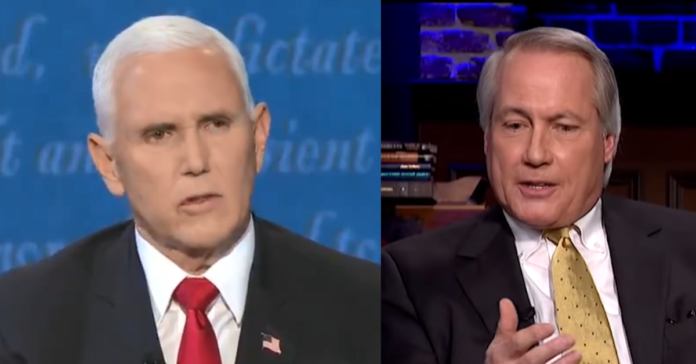 “We are aware of the comments and take all threats against our protectees seriously,” a Secret Service spokesperson told Fox News.

The Secret Service is also investigating others in the mob that attacked the Capitol who were roaming the halls screaming, “hang Mike Pence.”

“I am unaware of any actions by Parler to take down my posts,” said Wood. “If such action occurred, I received no notification of it. My post about Pence was rhetorical hyperbole conveying my opinion that his actions on the Electoral College vote were treasonous to We The People.”

The CEO of Parler, John Matze told Mediaite they removed a post from Lin Wood calling for Mike Pence’s execution by “firing squads.”

“Yes, some of his parleys that violated our rules were taken down,” said Matze. “Including the ones you are talking about.”

The Secret Service and other federal agencies also are investigating others seen on a video inside the U.S. Capitol yelling “Hang Pence.”

The threats to the vice president come days after a pro-Trump group stormed the U.S. Capitol to protest the formal certification of President-elect Joe Biden’s victory.

Lawmakers, staff members and others hid under tables and evacuated as the rioters roamed the halls of the Capitol, bearing pro-Trump flags and pounding on doors.

A source close to Pence told Fox News on Wednesday that while Pence was sheltering in “hardened rooms” in the Capitol, President Trump did not reach out to him to check on his status or condemn those who said the vice president “should be executed.”