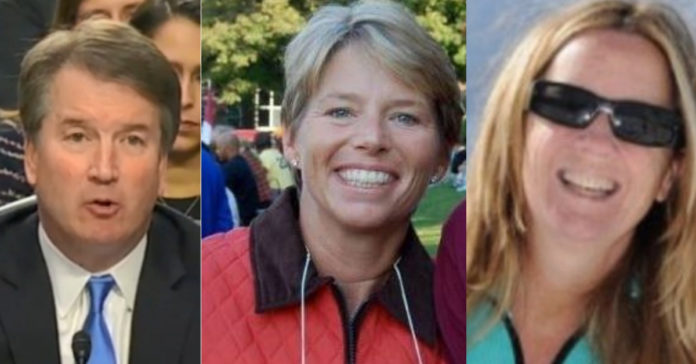 3 of the 4 people at the alleged party don’t remember the party.

Not the things slam dunk cases are made of. Game. Set. Match. As reported:

A friend of the woman who has accused Supreme Court nominee Brett Kavanaugh of sexual assault has denied that she was at the party where the alleged assault occurred.

The Senate Judiciary Committee reached out to Leland Ingham Keyser, a friend of Christine Blasey Ford. Ford claims Kavanaugh pinned her to a bed when he was drunk, covered her mouth, and tried to remove her clothing at a party in the early 1980s when they were in high school.

“Simply put, Ms. Keyser does not know Mr. Kavanaugh and she has no recollection of ever being at a party or gathering where he was present, with, or without, Dr. Ford,” the attorney wrote.

Keyser — a lifelong friends of Ford’s according to Walsh — is the third individual to deny suggestions that they were at the alleged party. Mark Judge and Patrick J. Smyth have also issued statements rejecting Ford’s recollection.

Ford’s lawyer Debra Katz said in response to Keyser’s attorney’s statement that it makes sense that Keyser wouldn’t remember, because Ford has said she did not share her allegations “publicly or with anyone for years.”

“It’s not surprising that Ms Keyser has no recollection of the evening as they did not discuss it,” Katz said in a statement. “It’s also unremarkable that Ms. Keyser does not remember attending a specific gathering 30 years ago at which nothing of consequence happened to her. Dr. Ford of course will never forget this gathering because of what happened to her there.”

Keyser is the latest person alleged to be at the party to say she has no recollection of it.

White House spokesperson Kerri Kupec said of those who allegedly attended the party, “One week ago, Dr. Christine Ford claimed she was assaulted at a house party attended by four others. Since then, all four of these individuals have provided statements to the Senate Judiciary Committee denying any knowledge of the incident or even having attended such a party.”

NEWS: Attorney for Leland Keyser, who Dr Ford says was at the party where the alleged incident with Kavanaugh occurred says “Ms. Keyser does not know Mr. Kavanaugh and she has no recollection of ever being at a party or gathering where he was present, with, or without, Dr. Ford.” pic.twitter.com/l2F0s396IK