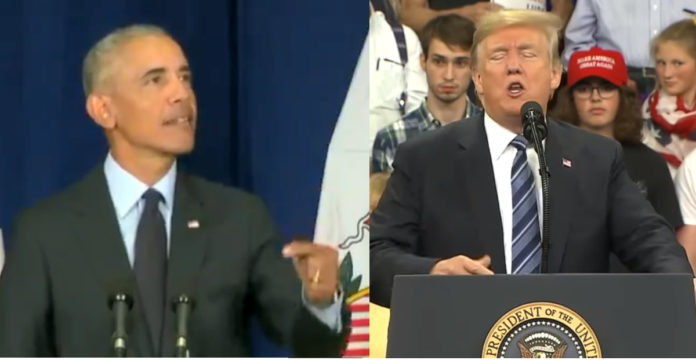 Obama tried to go on the offensive the other day but was tripped up by his own arrogance. Not unusual but still annoying to see.

He was taken back down to earth by many on both sides of the aisle, but this is the most exhaustive list of lies Obama told when he bashed Trump and needs to be shared far and wide.

Thanks to Breitbart for compiling this extensive list of the whoppers Obama thought he could get away with.

It’s Obama’s economy: The most important claim Obama made, departing from his prepared text, was that he deserves credit for the “economic miracle” Trump and Republicans are touting. “When you hear how great the economy’s doing right now, let’s just remember when this recovery started,” he said, to applause. As for Friday’s strong employment numbers: “Those job numbers are the same as they were in 2015 and 2016.”

The kernel of truth inside Obama’s claim is that the pace of job creation has been the same over the past several years. What he leaves out is that the economy is doing much better by several other measures as well, including the pace of growth, the rise in household income, and the increase in opportunities at the lower end of the spectrum.

Obama once mocked Trump’s promise to bring manufacturing jobs back to the U.S.: “What magic wand do you have?” Trump has performed that magic.

Moreover, when Obama takes credit for the economic recovery, he ignores the fact that it was the slowest recovery in the post-war era, largely due to his policies. The recovery began in earnest when Republicans took over the House in 2010, and put an end to any prospect of more massive stimulus bills, or more heavy regulations like Obamacare.

Today, Obama blamed the Republicans’ victory in 2010 for the fact that he failed “to reverse 40-year trends” of inequality. But Trump is doing it.

Trump is “capitalizing on resentments that politicians have been fanning for years”: This is an updated version of Obama’s “bitter clingers” theory in 2008, or Hillary Clinton’s “deplorables” comment in 2016. He views opposition to Democrats as motivated by fear, resentment, and hatred. He ignores the fact that he and his party played up class divisions —  the “one percent” versus the “99 percent” — throughout his presidency, among other divisions, including race and ethnicity.

Trump has been making the same economic arguments — right or wrong — since the 1980s. It is not a political ploy. He believes what he says about free trade agreements, about the need to preserve and build a manufacturing base.

Moreover, while Trump has certainly made the most of lingering grievances against Washington, his campaign was, and is, optimistic. His slogan in 2016 was “make America great again”; in 2020, it will be “keep America great.” There’s no darkness there.

Obama made the world safer. Obama claimed to have made the world more secure. He is correct that his administration “took out [Osama] bin Laden,” but he also presided over the rise of the so-called Islamic State. Obama also claimed he “got Iran to halt its nuclear program,” but we now know that was never true, and the deal only emboldened the Iranian regime to continue to spread terror. Obama also did nothing to stop North Korea. In many ways, he left us a more dangerous world.

The most preposterous part of Obama’s foreign policy roundup was his amnesia about his administration’s appeasement toward Russia. “They’re undermining our alliances, cozying up to Russia. What happened to the Republican party?” he said. How easily he forgets his “Russia reset,” his cancelation of U.S. missile defense in Europe, his rush to eliminate America’s nuclear weapons, his retreat from Syria, his open-mic promise to show “more flexibility” to Putin after the 2012 election.

Trump is “appealing to tribe.” Obama accused Trump of dividing Americans by race, and coddling extremists. “We’re sure as heck supposed to stand up clearly and unequivocally to Nazi sympathizers,” he said, alluding to events in Charlottesville, Virginia, last year when Trump was falsely accused of saying neo-Nazis were “fine people.”

Obama added: “How hard can that be — saying Nazis are bad?” Obama asked rhetorically, as if Trump had never said they were (he has, multiple times).

Obama certainly found it hard to dissociate from the racists and extremists with which he surrounded himself. He secretly met with Nation of Islam leader Louis Farrakhan after being elected to the U.S. Senate.

Worse, when the views of his racist pastor, Jeremiah Wright, were exposed, Obama delivered an entire speech explaining why he would not reject Wright (and the media loved it). Obama also told Latinos to “punish” their “enemies” at the ballot box.

It is he, not Trump, who appealed to “tribe.”

Trump is threatening freedom of the press. Obama declared: “I complained plenty about Fox News, but you never heard me threaten to shut them down or call them enemies of the people.”

Actually, Obama said something very much like that, when he  called Fox News “destructive” to the country.

Trump has fought back against what he calls “fake news,” but is more accessible to the media than Obama ever was. And Obama said nothing about his allies’ efforts to “de-platform” conservative media.

Perhaps the key word there is “explicitly,” because the Obama administration used the IRS to target the political opposition, though the president claimed not to have known about it.

Worse, the Obama administration did everything it could to shield Hillary Clinton from prosecution. In 2015, Obama gave an interview to CBS News’ 60 Minutes in which he all but exonerated her for her use of an illicit e-mail server and mis-handling of classified information.

His attorney general, Loretta Lynch, infamously met with Bill Clinton, and then-FBI director James Comey let her off the hook a short time later. And then there was the Russia investigation, tainted from the start by political aims.

Trump has no compassion for “immigrant children.” Obama was referring to the practice of separating illegal alien children from their parents when detained at the border.

Not only did he fail to distinguish between illegal aliens and “immigrants,” but Obama also ignored the fact that his own administration began the policy of separating children from parents — as a way of protecting children in custody. (Eventually, Obama’s policy simply became “catch-and-release.”)

Obamacare would not have led to single-payer (government) healthcare. This is not a lie from 2018, but a lie from 2009 that was disproven by Obama’s speech. On Friday, Obama said: “So Democrats aren’t just running on good old ideas like a higher minimum wage, they’re running on good new ideas like Medicare for all, giving workers seats on corporate boards, reversing the most egregious corporate tax cuts to make sure college students graduate.” These are all actually very old ideas.

More than that, the idea of “Medicare for all” was one that Obama specifically rejected in 2009. In a speech to the American Medical Association, then-President Obama said that critics who charged that Obamacare would be a way of moving toward a single-payer system were lying:

What are not legitimate concerns are those being put forward claiming a public option is somehow a Trojan horse for a single-payer system. I’ll be honest. There are countries where a single-payer system may be working. But I believe – and I’ve even taken some flak from members of my own party for this belief – that it is important for us to build on our traditions here in the United States. So, when you hear the naysayers claim that I’m trying to bring about government-run health care, know this – they are not telling the truth.

Obama’s support for “Medicare for all” suggests that he never believed in American “traditions” on health care — as both supporters and opponents suspected at the time.

Democrats are the answer. Obama’s closing pitch was that voting for Democrats in November would be the only way to “restore some semblance of sanity to our politics.”

The idea that re-electing Nancy Pelosi as Speaker of the House, and electing Democrats who want to impeach the president, raise taxes, abolish Immigration and Customs Enforcement, and extend Medicare to the entire country without a plan to pay for it represents a return to “sanity” — that is the biggest lie of all.

Obama Comes Out Swinging At Trump In California, Punches Himself In Face Instead (Video)