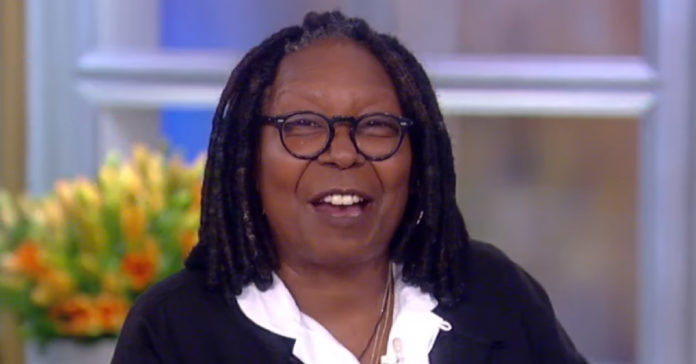 Whoopi Goldberg like the rest of the left is losing her mind over Judge Kennedy’s retirement.

Look, elections have consequences and Hillary should have gone to Wisconsin. And Michigan.

And Ohio and Pennsylvania. The fact is Hillary was arrogant and thought she had the rust belt sewed up.

She should have known better after her husband passed NAFTA and Bernie Sanders cleaned her clock in rust belt states primaries.

So she was warned – Bernie crushed her in the key swing states and Trump had a similar America first message and what did Clinton do?

Did she campaign hard? Did she show up time and time again like Trump did?

Nope, she counted her chickens before they hatched and she has to live with the consequences.

Just like Whoopi who said on national TV today:

“Here’s the piss-off for me. I’m the person that does believe that just because someone is appointed doesn’t mean —and I believe I have said that a lot about the Supreme Court — that you never know a person on the Supreme Court is going to vote because sometimes, you know, things change. They wake up. They see things. I don’t like hearing, again, that I’m trying to take your rights away. I have to tell you, as a woman, I think you’re trying to take my rights away.”

She continued, “As a person, who believes in the Constitution which tells me that I have the right to be myself and do the things I want to do, and I don’t have to listen to what your religion is, and I don’t have to listen to what you want it to be. I have to make sure that as an American citizen, I’m doing the right stuff and taking care of business. I don’t like this line that I as a Democrat, or an Independent or whatever is trying to take away anything from you. I’m trying to hold onto my personal rights so that you can have the rights you want. Because if you take mine, I feel like you’re the one with the problem. If you take my right away from me, to judge what I do for my family and my body, I got a little problem with that. You got a problem. You don’t want people to take your guns? Get out of my behind. Get out of my Vagina. Get out.”

Megan McCain Discusses Her Co-Hosts from ‘The View’. Your Jaw will DROP at What She Says About Whoopi and Joy.