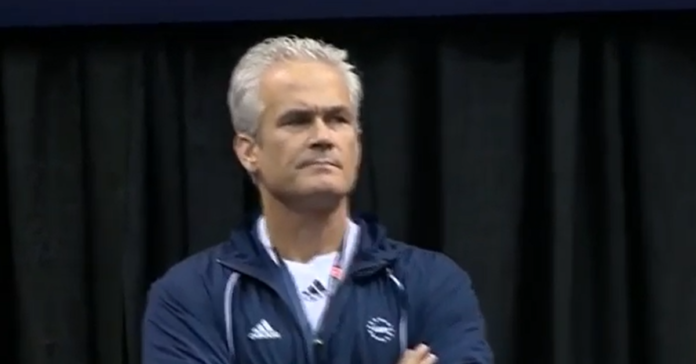 Police found the body of a former U.S. gymnastics coach, John Geddert, hours after he was charged with sex crimes in Michigan. He has ties to disgraced doctor Larry Nassar.

Geddert had agreed to surrender at a sheriff’s office today by 2:15 p.m. for his arraignment but was a no-show promoting the police to go find him. Michigan AG Dana Nessel said, “My office has been notified that the body of John Geddert was found late this afternoon after taking his own life. This is a tragic end to a tragic story for everyone involved.”

He was discovered in Grand Ledge, Michigan, dead by suicide. He was facing 20 counts of human trafficking and two counts of criminal sexual conduct.

He would have, if found guilty, spent the rest of his days behind bars with his depraved buddy Nassar.

The former coach led the U.S. women’s gymnastics team at the 2012 Olympic games in London, was charged with 20 counts of human trafficking and forced labor resulting in injury, one count of racketeering, two counts of criminal sexual conduct and one count of lying to police, according to a Michigan state criminal complaint filed in Eaton County.

In the two criminal sexual conduct counts, Geddert, 63, is accused of “sexual penetration” of a girl under 16 in January 2012, according to the complaint.

“John Geddert used force, fraud and coercion against the young athletes that came to him for gymnastics training for financial benefit to him,” Nessel told reporters.

“The victims suffer from disordered eating, including bulimia and anorexia, suicide attempts and self-harm, excessive physical conditioning, repeatedly being forced to perform even when injured, extreme emotional abuse and physical abuse, including sexual assault. Many of these victims still carry these scars from his behavior to this day.”

Former U.S. gymnastics coach dies by suicide hours after he was criminally charged in Michigan.

John Geddert had agreed to surrender at a sheriff's office on Thursday before arraignment, but he never showed up, DA spokesperson says. https://t.co/8N6UBeIgs7