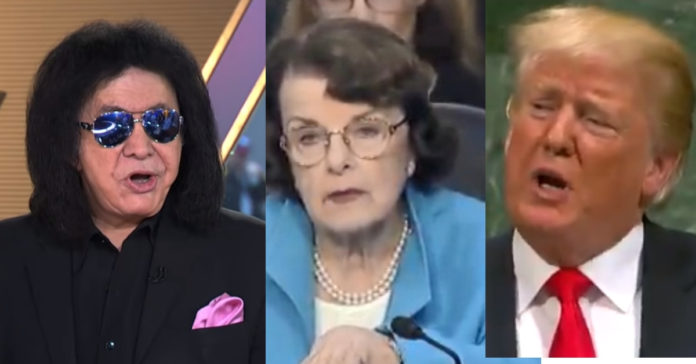 Gene Simmons has had enough of the attacks on Trump and all men in general. Never known for being politically correct, Gene took on the left’s smear merchants in a wide-ranging interview.

He also made a stunningly accurate prediction about President Trump. Look, the left is and has been playing a cheap and cunning form of politics during the Trump era.

But as Gene points out, people don’t vote for politics or even politicians, people vote for two simple reasons.

No stupid wars and good paying jobs and Trump is delivering these as the establishment has never and it terrifies them.

All the attacks on Trump are really just that – if he succeeds the establishment is done forever.

As reported by The Toronto Sun:

Q: At this point, how do you feel the very polarizing U.S. President Donald Trump is doing in his job?

A lot of people are unhappy, perhaps rightfully so. But the Dow Jones Industrial (Average is) 26,0000 or so, job rates are down to 3.9%, the economy is booming like never before.

The rest of it — politics. You like the guy, vote him back in. You don’t like guy, just make sure nobody votes him back in.

My assessment is very clear, unless he’s impeached, if there are no more big wars and if the Dow approaches 29,000, which it may, not only will President Trump be re-elected but it’ll be a landslide.

Q: So as long as the economy is booming, Trump is doing his job well?

Not if you have a problem with him socially and politically and stuff like that. But either you approach a country like a business or not because families only care about two things: Is my family safe?

Which means war, police, things like that. And can I feed my family? Do I have a job? Am I getting paid well?

The rest is politics. If you’re going to after President Trump for having an affair, you have to go all the way to George Washington and (Justin) Trudeau’s father, everybody. You have to go after men. The tendency to wander.