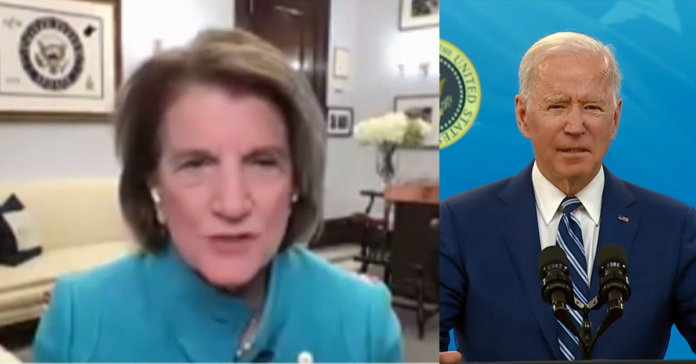 A group of Senate Republicans led by Sen. Shelley Moore Capito (R-W.Va.) on Thursday put the heat on Joe Biden and his stated goal of passing bipartisan bills. Politics is politics but Joe needs to step up and put his money where his mouth is or he will suffer steep losses in the 2022 election.

The GOP Senators unveiled a $568 billion infrastructure plan, smaller and more targeted than President Biden’s $2.3 trillion plan that is looking like a government boondoggle in the making.

The Senate Republicans’ plan defines infrastructure more narrowly than Biden’s controversial definition and some Dem Senators are suggesting they agree with the GOP.

“This is something that Congress has done for many, many years together on a bipartisan basis. Our focus today is to say what our concepts are as Republicans about what infrastructure means, what our principles are in terms of pay-fors and to say to President Biden and his team and our Democrat colleagues-‘We’re ready to sit down and get to work on this,’ ” Capito said.

The GOP spending priorities were laid out in a fact sheet titled “The Republican Roadmap” circulated to reporters before a press conference Thursday.

Capito said she put it together after conversations with Sen. Tom Carper (Del.), the top Democrat on the Senate Environment and Public Works Committee, and Republican colleagues met with Biden at the White House to discuss the possibility of an infrastructure compromise.

Wicker called it a “good faith effort” to begin negotiations with Biden and other Democrats.

Biden is also feeling him from some Dems with Joe Manchin telling Biden that he will not go for another massive government spending diaster. In short, Joe may not get a better off.

Manchin, a key vote in the 50-50 Senate, told West Virginia reporters, “I would hope to see Democrats and Republicans agreeing on infrastructure – infrastructure by itself.”

The declaration came as Transportation Secretary Pete Buttigieg and other administration leaders attempt to redefine “infrastructure” to include just about everything — beyond simply roads, bridges, and railways.

“If you can’t count on a glass of clean, safe drinking water, you’re not free. And you’re not able to live a life of your choosing,” he said.

“So, fixing lead pipes, as the president is proposing, is absolutely an infrastructure investment — and, by the way, one of the best investments we can make in future generations.”