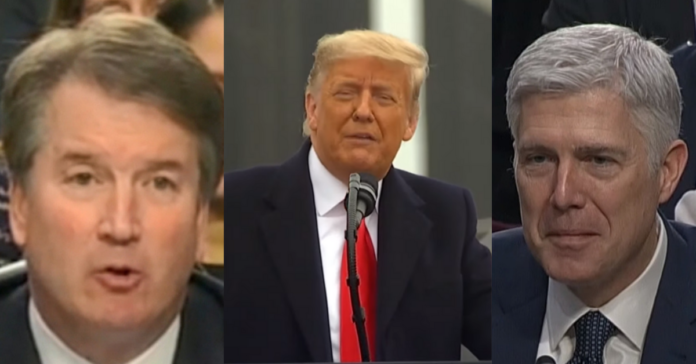 The Supreme Court dealt a blow to the Republican Party in Pennsylvania and former President Donald Trump and just refused to review a Pennsylvania election case. The vote was 6-3 with three conservatives judges dissenting arguing the case should be heard.

Justices Alito, Gorsuch, and Thomas dissent from the denial but as it only takes 4 justices to hear a case, Trump and the GOP were only one vote short of getting a full hearing at the SCOTUS.

The court also rejected other election cases. Lawrence Hurley, a Reuters reporter, said, “ In total the Supreme Court rejected eight presidential election cases, including two filed by Trump himself, one filed by Sidney Powell and one filed by Lin Wood. Only the PA case on late ballots featured any dissenting votes.”

He added, “Supreme Court rejects various election cases as well, with Alito, Gorsuch, Thomas dissenting over the decision not to hear dispute over late-arriving ballots in PA.”

From The LA Times:

The Supreme Court dealt a post-election defeat Monday to Republican officials in Pennsylvania by refusing to hear their appeal of state court rulings that allowed for the counting of mail ballots that were sent by election day but arrived up to three days later.

Pennsylvania’s attorney general had urged the court to turn down the appeal because the election was over and the case was moot.

At issue, however, was a potentially important question for the 2024 election about whether state legislatures or the state supreme courts could have the final word on a state’s election rules.

In total the Supreme Court rejected eight presidential election cases, including two filed by Trump himself, one filed by Sidney Powell and one filed by Lin Wood. Only the PA case on late ballots featured any dissenting votes https://t.co/wywywOfEyc

The court also turned away eight Trump/GOP appeals over the 2020 election, including a case some of us thought they might hear over the PA Supreme Court's extension of the ballot-receipt extension.https://t.co/7rdI88jRaI