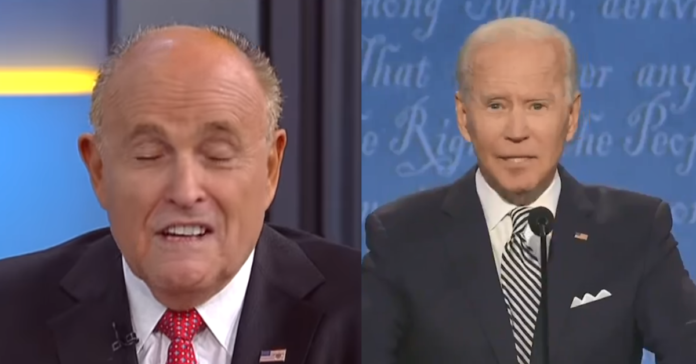 Lee Zeldin a Republican Representative from New York has called for a criminal investigation into Joe Biden’s family accusing them of running a pay-to-play operation.

“The DOJ/FBI needs to open a criminal investigation into the Biden Family’s global pay to play operation,” Zeldin said on Twitter.

He is referring to a bombshell story about Hunter Biden that is murky to say the least. It will all come out soon enough but in the meantime, we are all just scratching our heads wondering what in the heck is going on.

To add to the confusion Rudy Giuliani had an hour-long late-night interview with reporters from the Daily Beast where he said the chance that he was working with a Russian agent to get dirt on Biden was “no better than 50/50.”

The Post reports came under immediate suspicion, in part because of longstanding concerns within the intelligence community that Giuliani’s attempts to peddle dirt about the Bidens was aligned with a broader Russian attempt to subvert the 2020 election. But despite those fears, the former mayor said he has been “laughing my head off” about the whole affair. The criticism against him, including questions about whether or not this is part of a foreign election-interference operation, he added, was just “a bunch of bullshit.”

Sure, the U.S. Treasury Department may have declared one of his former associates—Ukrainian parliamentarian Andrii Derkach, who worked with Giuliani on his hunt for dirt on the Bidens—to be an “active Russian agent.” But that’s some Deep State talk, he added. “The chance that Derkach is a Russian spy is no better than 50/50.”

“My guess is that George Soros is behind this counter-offensive… because he wants to create a socialist country,” Giuliani baselessly alleged. “He’d like to see us collapse and see us taken over by the international… whatever.” Giuliani said that Derkach’s eventual sanctioning was the result of “an intelligence ploy to try to create problems for Trump—because Derkach could probably bury Obama.”

In the nearly hour-long phone conversation, Giuliani confirmed a prior Daily Beast report that he’d given Trump a heads-up about his latest salvo in his campaign against the Bidens—a long-running saga that birthed the Trump-Ukraine scandal and ended up getting Giuliani’s client, the leader of the free world, impeached at the hands of House Democrats.

“Sure, sure. The president knows all about this,” Giuliani said, adding that he had briefed Trump on the “general” parameters of the files.

The DOJ/FBI needs to open a criminal investigation into the Biden Family’s global pay to play operation.