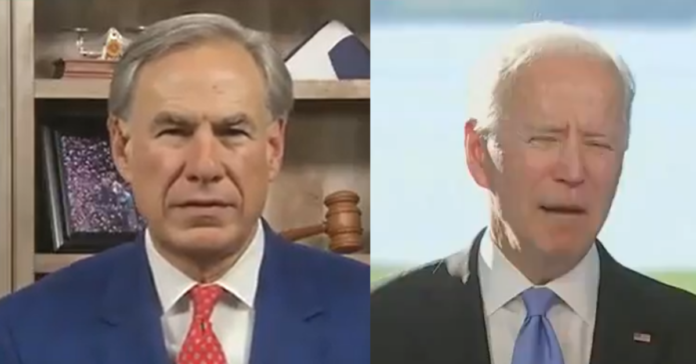 Texas Governor Greg Abbott had seen enough and with the border crisis getting worse not better so he stepped in with a huge move. He announced last week that Texas would build a border wall with Mexico and today he announced that construction has officially begun.

“Building the wall in Texas has officially begun,” Republican Gov. Greg Abbott said during a press conference Wednesday afternoon saying that construction was going on ‘as we speak.’ “There are state agencies talking to landowners on the border about putting up fencing on their private land to be able to prevent the dramatic influx that these landowners have been suffering from over the past few months,” Abbott said.

“Anybody who comes through or around or near that barrier is subject to being arrested for aggravated trespass and because these counties are subject to a disaster declaration, the penalties for trespass have been enhanced so that they are at a minimum, a Class B misdemeanor or potentially a Class A misdemeanor, which means they could spend a long time behind jail for violating the trespass laws of Texas.”

Abbott also shifted $250 million towards the project. Temporary barriers will be replaced at a later date with taller and stronger barriers Abbott relayed.

Abbott sent a letter to President Joe Biden asking to give back control of any lands Trump had seized for the wall. Many of these are tied up in court and the landowners may be open to this idea as it would require less of them than Trump’s plan.

“I am demanding that the Biden administration immediately return to Texans land that the federal government took to build a wall,” Abbott said.

“Texas will talk to those property owners about Texas using that land to build the wall.”

Abbott said, “While securing the border is the federal government’s responsibility, Texas will not sit idly by as this crisis grows. Texas is responding with the most robust and comprehensive border plan the nation has ever seen.”

“The Biden Administration has abandoned its responsibilities to secure the border and Texans are suffering as a result,” said Abbott.

He added: “The problems along the border are only getting worse due to President Biden’s inaction. Property is being destroyed, deadly drugs and illegal weapons are being smuggled into communities throughout the state, law enforcement is having to redirect their resources, and county judges and mayors are facing skyrocketing expenses.

“Texas is doing more than any state has ever done to protect the border, but it is clear that more is needed. In the Biden Administration’s absence, Texas is stepping up to get the job done by building the border wall. Through this comprehensive public safety effort, we will secure the border, slow the influx of unlawful immigrants, and restore order in our border communities.”

✔️Right now, border fences are being built on private properties

✔️Texas will build a wall

Governor Greg Abbott says Texas will spend $250,000,000 on a “down payment” for a state border wall. He’s also asking for donations of land and cash.

The state has spent $0 to help Texans pay the $18B surge in utility bills.

Due to Biden's open border policies, I just announced Texas' plan to continue securing the border & build the wall.

Today, I signed a law that will create the TX Holocaust, Genocide, & Antisemitism Advisory Commission & bolster our efforts to eradicate antisemitism in the Lone Star State.