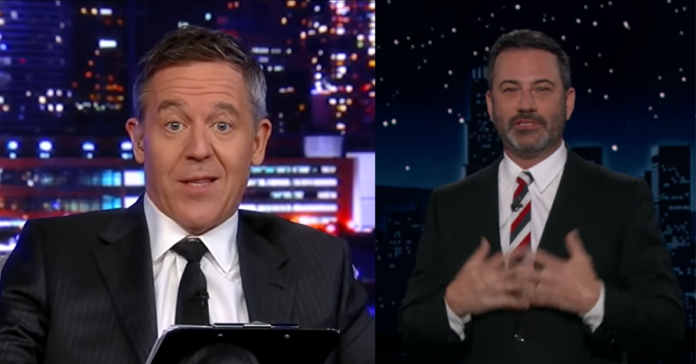 Fox News has another hit show on their hands and this time it is at the expense of late-night broadcast shows “Jimmy Kimmel Live!” and “The Tonight Show Starring Jimmy Fallon.” Greg Gutfeld’s new late-night show recently beat both those Hollywood stars according to a new report from The Hill.

Gutfeld!” averaged 1.6 million viewers for the week ending May 14. That beat both Jimmy Kimmel on ABC and Fallon on NBC. Greg does still sit behind CBS’s “Late Show with Stephen Colbert” but he is closing fast.

May 13 was Gutfeld’s best night so far with 1.8 million viewers. Even though he came in behind Colbert’s show, which drew 1.9 million viewers, Gutfeld beat Colbert in the key 25- to 54-year-old demographic.

The Wrap reported in early May:

After a month on the air, Fox News’ new late-night program, “Gutfeld!” is doing what it set out to do: It’s killing in late-night ratings.

In a comparison of live and same-day total viewers for all the late-night shows on cable and broadcast, in fact, Greg Gutfeld’s new nightly show was beaten only by Stephen Colbert’s “Late Show” on CBS and “Jimmy Kimmel Live!” on ABC over the past month, according to Nielsen Media Research ratings data. (Note that the programs all start at different times and in many – but not all – cases, they’re not competing directly.)

Next came Gutfeld’s 11 p.m. ET offering, pulling in 1.515 million total average viewers. Of those, 305,000 were between 25 and 54 and 181,000 were between 18 and 49. These numbers are notable because fewer American households have cable than the broadcast networks.

Jimmy Fallon’s “Tonight Show” on NBC came next with 1.395 million total average viewers. Fallon did beat Gutfeld — and everybody else — in the 25-to-54 demo, pulling in 416,000 average viewers there.

Beat Kimmel and Fallon in total viewers, topped Colbert and the aforementioned in the 25-54 demo: https://t.co/zm1s1hQzg3

This is actually a pretty incredible achievement for a late night show on a cable news network to be even close to the "big" late night shows, much less overtaking them