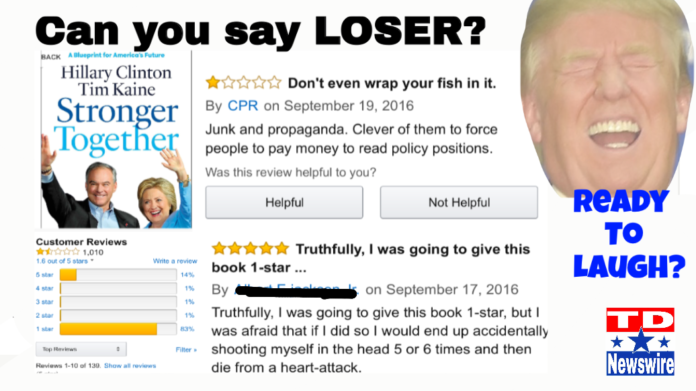 As Donald Trump would say, Hillary Clinton’s new book is “real loser”.   Calling this book a loser would not be hyperbola either.  It’s a stinker. A dog.  A bomb.   According to the New York Times, only 2,912 of these books were sold in the first week.   How is that even possible?   Well. here’s a hint.  Read the reviews.

If you’re a little down in the dumps or want to laugh just read the Amazon reviews for Stronger Together by Hillary Clinton and Tim Kaine.  And keep in mind these are just some of the 5 (yes FIVE) STAR REVIEWS!   LMFAO

The Art of the Shakedown by Hill and TimBy Elaineon September 16, 2016  I bought this thinking it would be a how-to book. I wanted “How to set up your own Foundation for fun and profit.” Also, would like to have seen a chapter on “Ten easy steps to setting up your own secure server in a bathroom.”
I do hear there’s going to be a sequel, tentatively called “The Art of the Shakedown.”

By seaoh on September 17, 2016Format: PaperbackThis could be the first “book” in history to have more reviews on amazon the actual sales bwwwwaaaahAAHA lol

By Mary Beth  on September 17, 2016 Format: Paperback The table of contents is missing some salient subject matter: voter fraud & rigging, nixing Bernie Sanders from the race using fraud with intent, how to fire & re-hire your DNC leadership in one day, gag orders 101 & how to fake medical records. 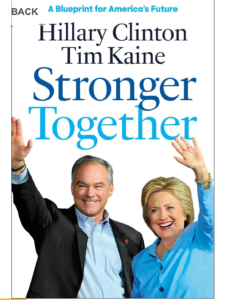 By Liz on September 17, 2016Format: Paperback I had the Clinton approval to purchase this book prior to the release date for just $353,000. My edition had the now-deleted chapters: “I Didn’t Cheat the Democrats out of the Candidate who Actually won the Primary, but if I Did, Here’s How I Would Have Done It,” “Deleting Emails is as Easy as 1-2-3,” and “How to Pretend to be Dumb When Asked Questions You Can’t Answer Truthfully.” I must say, I really learned a lot and I look forward to the shift from the freedom to choose to a complete dictatorship under the Clinton oligarchy. Honestly, I’m thrilled because making decisions and controlling my own life is so annoying!
5.0 out of 5 stars Excellent propoganda and toilet paperByAmazon Customer on September 18, 2016Format: Paperback This is the best propoganda ever written. The lies here are among the greatest ever told. The fact is they are almost convincing enough to fool one person! Maybe that one person may actually vote for Hillary. I on the other hand am voting Jill Stein. I of course gave this book five stars because of the fact I don’t want to die of natural causes and of course the book was excellent toilet paper as well.Comment|26 people found this helpful. Was this review helpful to you?YesNoReport abuse 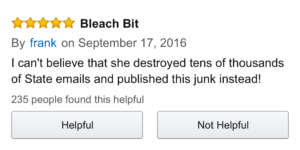 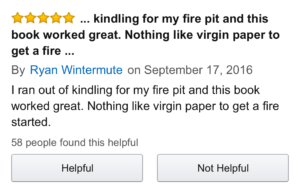 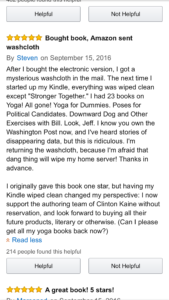 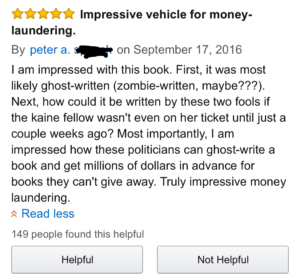 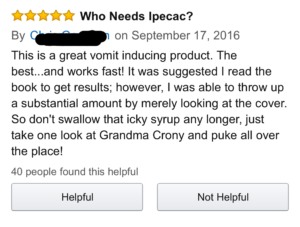 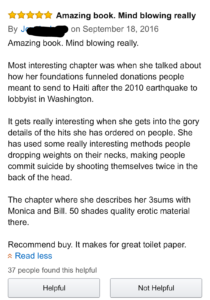 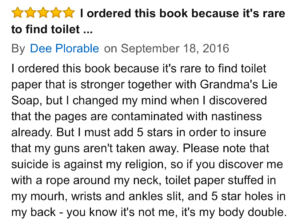 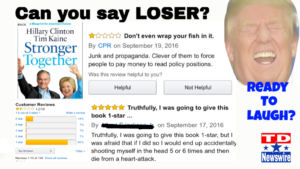 Now keep in mind folks, these are just a FEW of the 5 Star rated comments.   For more in depth criticism go to Amazon and check on the 1 star ratings.  If you want more of these hilarious 5 star comments continue to page 2.