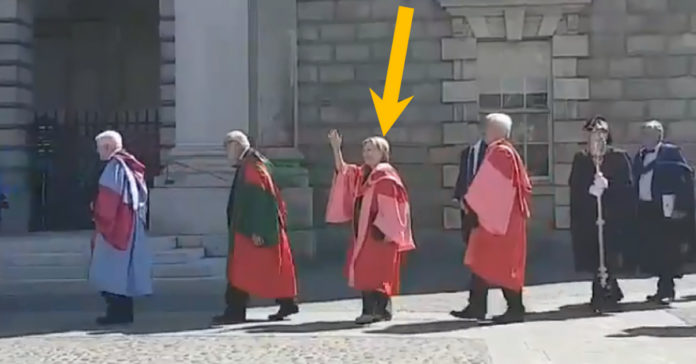 Hillary Clinton went to Dublin Ireland to get one of those BS honorary degrees politicians and phonies love so much.

You ever notice why Trump doesn’t have a bunch of these “participation trophies?”

Because they are for phonies. And Hillary is close to the biggest phony in the world.

America rejected her because of it – we simply didn’t trust her and she got no warm welcome across the pond either.

Instead, she was heckled and booed by the Irish crowd. Funny.

From The Irish News

Clinton was one of five people recognised for what the college calls “their contribution to society”. However, the procession into the conferring hall was marked by a small number of protesters chanting “warmongers not welcome”.

“Now, a lot has happened since I was last in Ireland. I became a grandmother twice over, which is just about the greatest thing in the world. As you may have heard, I ran for president. That didn’t exactly work out how I had hoped,” she said.

“I’ve also seen what’s possible when young people participate, and make your voices heard. The Irish abortion referendum was an inspiring sight. People flew home to vote from all over the world.”

The award of the degree came against the backdrop of two protests outside the college against Clinton receiving the honour. Councillor Éilis Ryan of The Workers’ Party said that Clinton’s role in “promoting war should be reason enough to deny her this honour”.

“She advocated a war in Iraq which cost half a million lives, led the bombing of Libya which left a chaotic vacuum behind that has been filled by a return to human slavery, and promoted and facilitated a coup in Honduras which led to the murder of many progressive, female political activists.”

Quite the body count, Hillary… yet according to the media, Trump, the guy making peace across the world, is the monster?

"Warmongers not welcome" a couple of chants against Hillary Clinton are quickly drowned out by applause. pic.twitter.com/fvxlgOCr40

Hillary Tries To Bash Trump, Exposes Herself As Titanic Fraud Instead

Ouch! Hollywood Hero Clobbers Crooked H. for being in a “Perpetual Snit.” Best One Yet