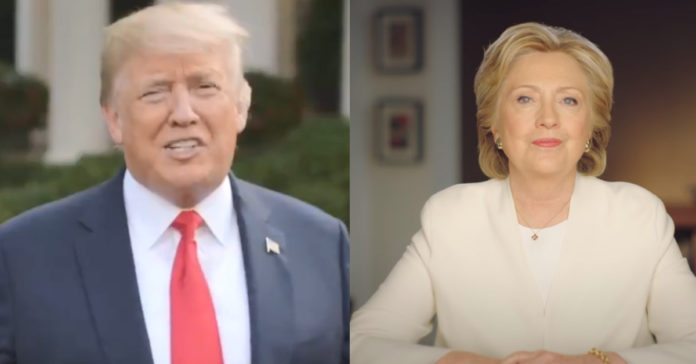 Hillary Clinton was the single worst candidate in American history. She was so bad that the exact same strategy was used to crush her twice.

People forget that Obama portrayed Hillary as the corrupt choice of the establishment before Trump even thought about running.

It worked twice because it is true. That Hillary was too stupid to figure out a way to counter that argument and too arrogant and entitled to dare not run doomed the left to their fate.

That’s why they hate Trump so much – they really did it to themselves and that they cannot ever admit.

Failed presidential candidate Hillary Clinton returned to the public forum demanding an end to the electoral college in presidential elections because President Donald Trump was a terrible president.

“You won’t be surprised to hear that I passionately believe it’s time to abolish the Electoral College,” she wrote in a new op-ed in the Atlantic.

Clinton complained that Trump was a racist who was destroying American democracy.

“Trump has sunk far below the already-low bar he set for himself in his ugly campaign,” she wrote, ticking of a laundry lists of offensive actions and public failures in his presidency.

Clinton argued Americans that Trump was a racist, citing his comment about “shithole countries” in Africa, suggesting he did not care about the victims in Puerto Rico because they were Latino, failed to condemn hate crimes against Muslims, and criticized NFL players.

She also complained that Trump lacked “civic, republican virtue” and the idea of public service.

Again, she complained that Trump “won enough Electoral College votes” to beat her in the election and that the Russian manipulations of American elections was still a threat.

“Democracy may be our birthright as Americans, but it’s not something we can ever take for granted,” she wrote. “Every generation has to fight for it, has to push us closer to that more perfect union. That time has come again.”

What a fraud. Look, the Clinton’s sold out working people in America and we will never forget it.

With her terrible history she never should have run and rather than blame democracy or the constitution or Russia, Hillary needs to just get over it and get off the stage.

America rejected her twice, we will do it again if given the chance.

Ouch! Hollywood Hero Clobbers Crooked H. for being in a “Perpetual Snit.” Best One Yet