Late last month a loony liberal  North Carolina Circuit Court of Appeals struck down a ruling that upheld  a North Carolina law  requiring voters to present ID’s when voting.   This is not good news for the Donald Trump camp because we know Crooked Hillary and her FRAUD MACHINE will do anything to win and George Soros is chomping at the bit to pay more $$$ to the fine upstanding individuals he had protesting in Charlotte to get them to vote AS MANY TIMES AS POSSIBLE! You would think that is the year 2016 that technology would have all but eliminated the potential for vote fraud. But no, no, no….  Are we living in some type of a BIZZARO WORLD (Seinfeld fans) where Illegal immigrants can get drivers licenses and a person with NO FORM OF IDENTIFICATION can walk into a polling place and vote for the President of the United States.   Oh brother!!!

These “hobos for Hillary” may arrive in box cars on freight trains.  They may arrive in old VW buses.  One thing we know for sure is that they will arrive en masse.  Many of them will be local,  no doubt that the same drug addicted derelicts that chased me with a bull horn in Charlotte.   This time instead of protesting Trump for reason unknown (to them).  They will be out voting and most likely shuttled to different precincts by the Clinton/Soros FRAUD MACHINE . 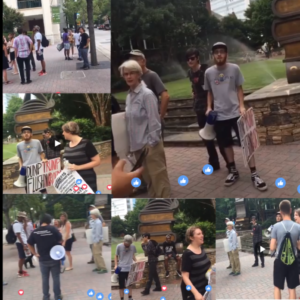 In Charlotte two weeks ago I asked these “protesters”  what the were “protesting” they could not tell me.  They just wanted me to move to so they could continue smoking cigarettes for $15/hour. Folks they literally has NO IDEA what they were supposed to be protesting about.  When I asked them , at first they said nothing and then one finally said they were protesting his “racism”.

Baring a judicial miracle, with time the limiting factor, the only they we can do to stop this is to make everyone AWARE of the North Carolina situation and watch the polls carefully.

PLEASE SHARE THIS ON FACEBOOK AND TWITTER WITH EVERYONE YOU KNOW.  THIS COULD MAKE OR BREAK OUR CHANCES OF GETTING MR. TRUMP INTO THE WHITE HOUSE.