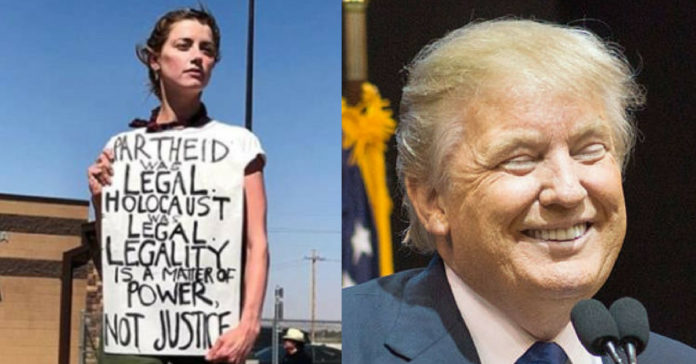 You cannot – even in Hollywood the land of make believe – make this stuff up. Look, illegal immigration is a problem because it drives down wages for Americans.

It is that simple. And the cat is out of the bag so don’t let them fool you – the left wants cheap labor.

From the Daily Mail:

Amber Heard has come under fire after attempting to joke about an ICE checkpoint on Twitter.

The actress, 32, posted a tweet early in the morning on Tuesday warning her 60,400 followers that an ICE checkpoint near her home in Los Angeles.

‘Just heard there’s an ICE checkpoint in Hollywood, a few blocks from where I live, she wrote. ‘Everyone better give their housekeepers, nannies and landscapers a ride home tonight…’

It appears that Amber was trying to highlight, thanks to a sarcastic joke, unfair stereotypes used to used in order to justify President Donald Trump’s ICE policies.

She added in a follow-up tweet, seemingly trying to clarify her message: ‘Checkpoints on your home streets…. Is this the “great” America we’re aiming for?

‘Raids, fences and police-state like checkpoints don’t feel like the “land of the free” our immigrant ancestors built.’

But her initial tweet did not go down well, and several other Twitter users deemed it ‘racist’ and overall insensitive.

Another person replied: ‘I see the remnants of a joke in this but it is not working…’, while another Twitter user wrote: ‘This is racist and disappointing.’

‘I can see where you were going but somewhere along the way you took a wrong turn. Delete this sis,’ someone else told the actress.

‘Can this sound any more 1950s white privileged? These professions aren’t just for immigrants nor do they need “white chaperones” as a safety net. You could have worded this better,’ one Twitter user wrote.

Just heard there’s an ICE checkpoint in hollywood, a few blocks from where I live. Everyone better give their housekeepers, nannies and landscapers a ride home tonight…

Look, Trump’s right and Hollywood is wrong and if you didn’t believe that before, you damn sure better now.

Soros Funded Group launches Phone App to do the UNTHINKABLE.