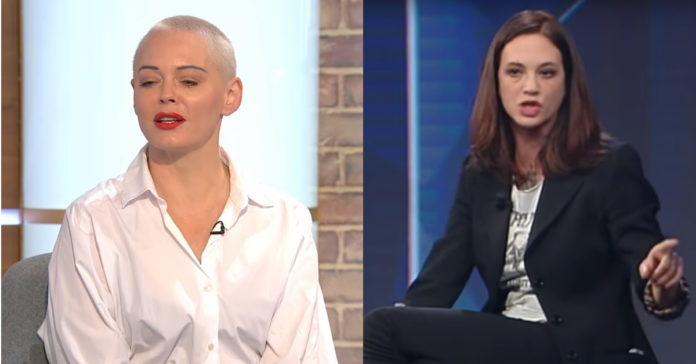 There is trouble in the liberal paradise of their signature movement won’t survive. The left hitched its wagon to a movement bent on destruction and that will be their undoing.

Most sane people think the #metoo politically correct movement simply went too far and ended up destroying itself when it took down a key ally in Al Franken.

What dunces would take down one of the most liberal politicians in Washington?

The left got a bit drunk with their movement and it backfired in spectacular fashion and they are learning the hard way that zealots always get exposed.

That common sense is the goal, not phony outrage.

AS reported by Rolling Stone:

Asia Argento threatened legal action against Rose McGowan, her former friend and fellow pillar of the #MeToo movement, if McGowan doesn’t retract a statement she made in August concerning the sexual assault accusations against Argento.

“Dear @RoseMcGowan. It is with genuine regret that I am giving you 24 hours to retract and apologize for the horrendous lies made against me in your statement of August 27th,” Argento tweeted Monday morning. “If you fail to address this libel I will have no option other than to take immediate legal action.”

On August 27th, McGowan severed her friendship with Argento, acknowledging that a shared friend named Rain Dove told McGowan that Argento admitted to having sex with Jimmy Bennett, the former child actor at the center of Argento’s sexual assault scandal; Argento reportedly paid Bennett $380,000 to keep quiet about the 2013 incident, a payment that occurred in the aftermath of the Harvey Weinstein downfall.

“Asia, you were my friend,” McGowan wrote on August 27th. “I loved you. You’ve spent and risked a lot to stand with the #MeToo movement. I really hope you find your way through this process to rehabilitation and betterment. Anyone can be better ­– I hope you can be, too. Do the right thing. Be honest. Be fair. Let justice stay its course. Be the person you wish Harvey could have been.”

McGowan later added that she felt “betrayed” by Argento over the Bennett accusations.

Dear @RoseMcGowan. It is with genuine regret that I am giving you 24 hours to retract and apologise for the horrendous lies made against me in your statement of August 27th. If you fail to address this libel I will have no option other than to take immediate legal action.