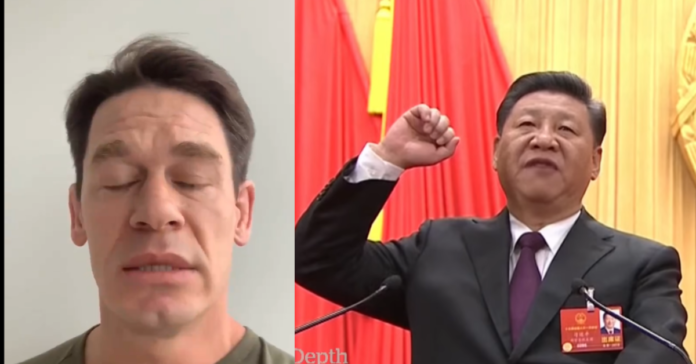 Hollywood star John Cena just issued a disgraceful and groveling apology to Chinese fans after calling Taiwan a country while promoting his new movie. The 44-year-old American made the comment on Taiwanese broadcasting network TVBS.

He is out on a promotional tour for the Hollywood blockbuster Fast & Furious 9. Shortly after he made the comments he posted a video message on Sina Weibo to grovel so that the Chinese government didn’t ban the film although he didn’t phrase it like that.

He says in the video below: “Hi China, I’m John Cena. I’m in the middle of Fast and Furious 9 promotions. I’m doing a lot of interviews. I made a mistake in one of my interviews.

“Everyone was asking me if I could use Chinese – movie staff gave me a lot of information, so there was a lot of interviews and information.

“I made one mistake. I have to say something very, very, very important now.

“I love and respect China and Chinese people.

“You must understand that I really love, really respect China and the Chinese people.

“My apologies. See you.”

There are more than 5,000 comments on Cena’s Weibo apology.

“Please say in Chinese that Taiwan is part of China. Otherwise, we won’t accept it,” wrote one Weibo user. The message had over 3,200 likes.

“Then you should say Taiwan is China’s!” wrote another user. “What you have said in the video is nonsense. You can’t take benefits from China, but in the meantime, do things to harm China’s interests.”

Others supported Cena, with one person writing: “I like you. I think you truly love China. Don’t talk carelessly again about China’s territory and sovereignty.”

On a local broadcast earlier this month, Cena referred to Taiwan as being “the first country to watch the film”.

Thie remark irked some in mainland China as Beijing insists that the self-ruled island is an indispensable part of the country.

John Cena apologized in Chinese on Sina Weibo after calling Taiwan a country during an interview promoting Fast & Furious 9 pic.twitter.com/dzRKIYgEzL