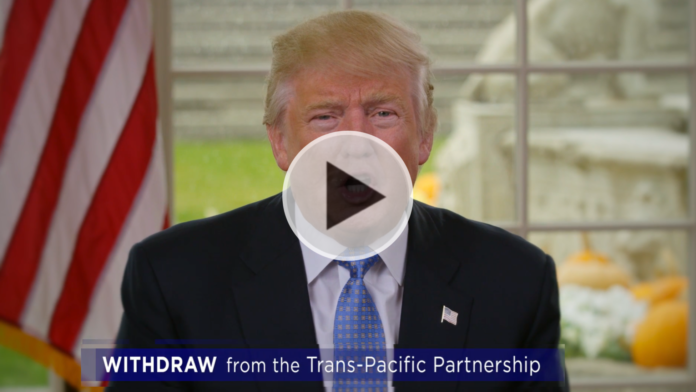 Monday evening President-elect Donald Trump made a short video for the American people, updating everyone on the transition and what he intends to do in his first 100 days in office. President Trump may turn out to be the most transparent president in history, unlike Barack Obama who claims to be transparent but is anything but.  (VIDEO BELOW)

Please WATCH this 90 second piece of history and SHARE this with all your friends.  The mainstream crooked media with not want folks to see this.  SHARE!! (VIDEO BELOW)

Today I would like to provide the American people with an update on the White House transition and our policy plans for the first 100 days. Our transition team is working very smoothly efficiently and effectively. Truly great and talented men and women Patriots indeed are being brought in and many will soon be a part of our government helping us to make America great again.
My agenda will be based on a simple core principle…. putting AMERICA FIRST.  Whether it’s producing steel, building cars or curing disease I want the next generation of production and innovation to happen right here on our great homeland America creating wealth and jobs for American workers. 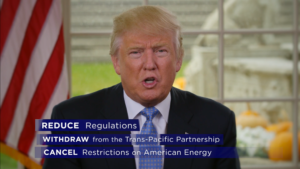 As part of this plan I’ve asked my transition team to develop a list of executive actions we can take on day one to restore our laws and bring back our jobs. It’s about time. These include the following on trade:  I’m going to issue our notification of intent to withdraw from the trans-pacific partnership,  a potential disaster for our country. Instead we will negotiate fair bilateral trade deals that bring jobs and industry back onto American shores.
On energy I will cancel job-killing restrictions on the production of American energy including shale energy and clean coal creating many millions of high-paying jobs. That’s what we want. That’s what we’ve been waiting for.
On regulation I will formulate a role which says that for every one new regulation two old regulations must be eliminated. So important or national security, I will ask the Department of Defense and the chairman of the joint chiefs of staff to develop a comprehensive plan to protect America’s vital infrastructure from cyberattacks and all other form of attacks. 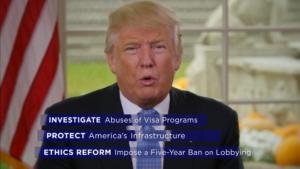 On immigration I will direct the department of labor to investigate all abuses of visa programs that undercut the American worker.
On ethics reform as part of our plan to drain the swamp we will impose a five-year ban executive officials becoming lobbyists after they leave the administration and a lifetime ban on executive officials lobbying on behalf of a foreign governments.
These are just a few of the steps we will take to reform Washington and rebuild our middle class I will provide more updates in the coming days as we work together to

MAKE AMERICA GREAT AGAIN FOR EVERYONE.  AND I MEAN EVERYONE!

President-Elect Trump thanks you for your vote!