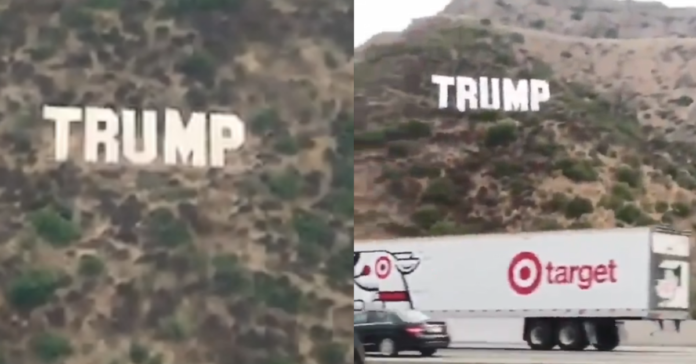 Pro-Trump activists put up a huge Hollywood-style “Trump” sign off the 405 freeway in Los Angeles near the Getty Center.

The letters are 20 feet tall and 70 feet long and make a massive statement that cannot be missed.

“By being on the 405, looming over Westwood and the Getty, we have taken our message right into the belly of the CA progressive beast,” the group behind the sign said in a statement to The Gateway Pundit.

“It is a signal to all of the war weary citizens here behind enemy lines that they are not forgotten and that there is hope and others like them here in Vichy California.”

“Since Trump’s hospitalization, its interpretation may have changed to that of a ‘get well’ card, but as Trump rises like a Phoenix from the flames of Hoax-vid 19, we hope the former interpretation is the one that sticks.”

Second, it is a sign to other Trump supporters “that there is hope.”

Someone put up a Hollywood-style Trump sign on the 405 pic.twitter.com/eCqtoIwN5q