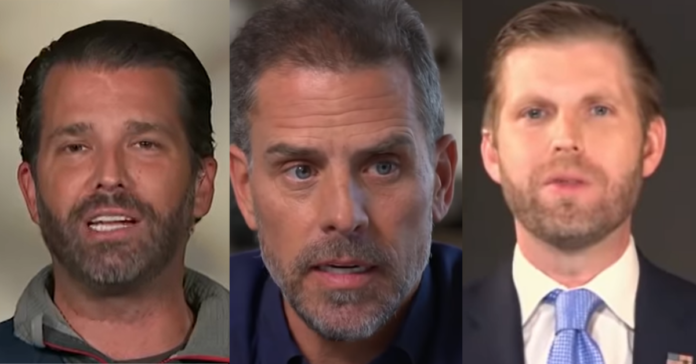 Hunter Biden has a new book coming out and he seems eager to try to settle some old scores. To that aim, he takes a few swipes at some of his critics according to a new report from The Guardian. The media outlet was able to get a copy of Hunter’s new book ahead of publication.

Hunter denies all the scandalous accusations lodged against him, even the Burisma scandal that is pretty well documented (that he got $50K a month because Joe was VP).

He goes after former President Donald Trump, GOP Senator Lindsey Graham (a close family friend), and Eric and Don Trump Jr. “I am not Eric Trump or Donald Trump Jr. I’ve worked for someone other than my father. I rose and fell on my own,” Hunter writes and no one, not even Joe Biden, believes him.

Hunter admitted in the book he would not have gotten many jobs in the past if not for Joe including a then scandalous job at Burisma to seemingly disprove his own allegagations against the Trumps.

Hunter went after Matt Gaetz for some reason calling him a troll. And in a very scandalous move, he trashed longtime family friend Lindsey Graham. He said Graham “morphed into a Trump lapdog right before my eyes, slandering me and my father in the coldest, most cynical, most self-serving ways.”

As To Trump, Hunter calls him vile.

“I became a proxy for Donald Trump’s fear that he wouldn’t be re-elected,” Hunter writes.

“He pushed debunked conspiracy theories about work I did in Ukraine and China, even as his own children had pocketed millions in China and Russia and his former campaign manager Paul Manafort sat in a jail cell for laundering millions more from Ukraine.

Hunter writes that Trump swas “a vile man with a vile mission” who sank to “unprecedented depths” in last year’s election.

“None of that matters in an up-is-down Orwellian political climate. Trump believed that if he could destroy me, and by extension my father, he could dispatch any candidate of decency from either party, all while diverting attention from his own corrupt behavior.”

On the page, Biden insists he did nothing wrong in joining in April 2014 the board of Burisma, the gas company at the heart of the Ukraine affair. He dismisses the controversy as “remarkable for its epic banality”. But he says he would not do so again.

He found the company’s role as a bulwark against Russian aggression under Vladimir Putin “inspiring”, though the five-figures a month fee was also a factor. Biden acknowledges that his famous surname was considered “gold” by Burisma. “To put it more bluntly,” he writes, “having a Biden on Burisma’s board was a loud and unmistakable fuck-you to Putin.”

Giuliani’s search for dirt saw Trump impeached – and acquitted – for the first time. Republican attacks on Hunter Biden have continued, focusing on his business dealings and also his troubled personal life, including well-known struggles with drink and drug addiction and recently a decision to purchase a gun which became part of a domestic dispute.

Biden’s memoir, Beautiful Things, deals with such personal issues as well as the deaths of his mother and sister in a car crash in 1973 and that of his older brother, Delaware attorney general Beau Biden, from brain cancer in 2015. The book will be published next week. The Guardian obtained a copy.