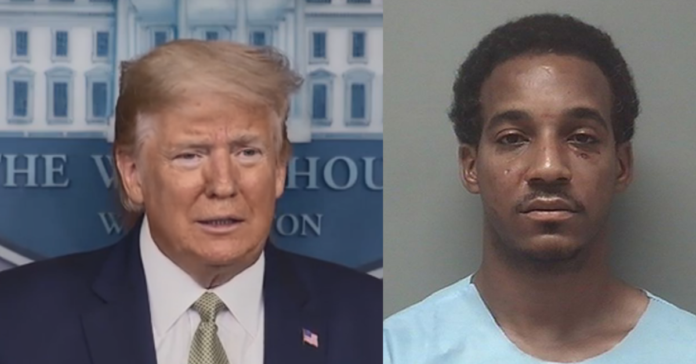 A central Illinois man has been arrested and charged with threatening the life of former President Donald Trump federal prosecutors announced Thursday.

Damien Grant, 33, of Peoria is charged with influencing a federal official by threat, mailing threatening communications, and threatening the president of the United States.  He also threatened a U.S. attorney and a federal judge,

Grant made the threats from inside a country jail where he has been held since July 2019. He was being held after getting in an altercation with two Illinois State Police troopers after a traffic stop.

The threats against the three were made between the November presidential election and when Biden was sworn in on Jan. 20.

The threats Grant allegedly made were against Trump, the U.S. Attorney for the Central District of Illinois John Milhiser, and U.S. District Judge James Shadid.

The threats against the three were made between the November presidential election and the Jan. 20 inauguration of President Joe Biden.

“And the moment you walk out of office, I’m going to have you shot! Right in your (expletive) head,” Grant allegedly wrote in a Dec. 22 letter to Trump.

In a letter to the U.S. attorney, Grant allegedly wrote the prosecutor had two days to drop investigations and charges against him, or he will make sure Milhiser will never see Christmas.

“I might have someone walk in the Court House and blow all you evil (expletive) to pieces,” Grant said in a Nov. 30 letter addressed to the U.S. Attorney for the Central District of Illinois.

An Illinois man is accused of threatening the life of former President Donald Trump, a U.S. attorney and a federal judge. https://t.co/eUg0Y46yxl