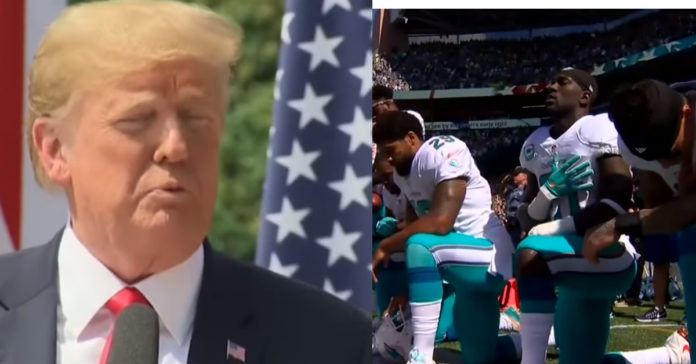 It begins…expect it to get a lot worse in the coming weeks. NFL training camp is set to begin in August, is it already August?

The Miami Dolphins management decided to get ahead if the controversy and just laid down the law.

Miami Dolphins players who protest on the field during the national anthem could be suspended for up to four games under a team policy issued this week.

The “Proper Anthem Conduct” section is just one sentence in a nine-page discipline document provided to The Associated Press by a person familiar with the policy who insisted on anonymity because the document is not public. It classifies anthem protests under a large list of “conduct detrimental to the club,” all of which could lead to a paid or unpaid suspension, a fine, or both.

Though Titans coach Mike Vrabel said in May that the organization and team owner support players’ decisions in regards to conducting protests during the national anthem, the team wants to talk to Jurrell Casey about his plans to protest social injustice.

Miami’s anthem policy comes after the NFL decided in May that teams would be fined if players didn’t stand during “The Star-Spangled Banner” while on the field. The league left it up to teams on how to punish players. None of the team policies has been made public.

Any team that wants to discipline its players would have to do so under the “conduct detrimental” portion of the collective bargaining agreement.

The specific punishment that a team would be able to hand out according to the CBA states, “Conduct detrimental to Club – maximum fine of an amount equal to one week’s salary and/or suspension without pay for a period not to exceed four (4) weeks.”

Do you think this will work? 4 games is a lot of money in a league without guaranteed contracts?

My guess is this will fix the problem.