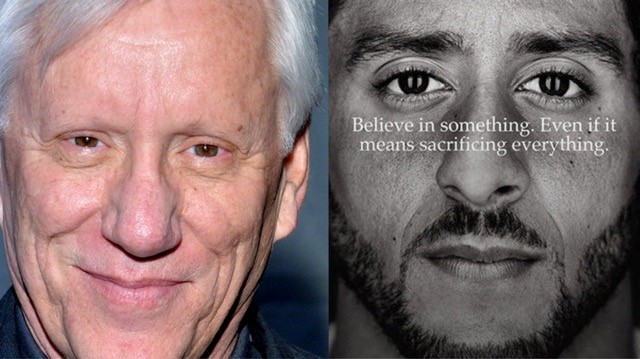 Thank God for James Woods. He does not give the fools on the left even an inch when they lose their minds and go crazy.

No James Woods tells it straight no matter who gets hurt and in this case it hit Nike and Kaepernick right where it hurts and they deserve it.

As reported by Breitbart: Veteran actor and conservative firebrand James Woods is selling all his Nike stock in response to the athletic apparel company’s decision to name former San Francisco 49ers quarterback and infamous anthem protester Colin Kaepernick as the face of their new “Just Do It” campaign.

Woods on Tuesday tweeted a screenshot to his nearly 1.7 million followers of an email he sent to his portfolio manager asking all his Nike stock be sold. “Please divest my portfolio of all Nike stock in my personal account and in the plan. Henceforth never buy Nike stock for me again,” the email read. Woods wrote on Twitter that the email was the first of the day, along with the hashtag “#ScrewNike.”

Moments later, the two-time Oscar nominee tweeted a meme displaying Nike’s “swoosh,” logo with the tagline “Nike stock, just sold it.” — a play on the company’s iconic slogan “Just Do It.”

Unveiled ahead of the 2018 NFL season, the advertising campaign marks Nike’s 30th anniversary of the company’s “Just Do It” slogan. The ad displays a Kaepernick portrait with the slogan, “Believe in something. Even if it means sacrificing everything.” The former 49er took to Twitter to promote the ad with the hashtag “#JustDoIt.”

Kaepernick, who signed a sponsorship agreement with Nike in 2011, remained on the shoe giant’s payroll throughout the anthem protest controversy, according to ESPN.  “We believe Colin is one of the most inspirational athletes of this generation, who has leveraged the power of sport to help move the world forward,” Nike vice-president Gino Fisanotti said.

James Woods, who vowed in 2016 to never again watch the NFL over the anthem protests, has been highly critical of Kaepernick, referring to the out of work quarterback as a “dirtbag,” and “P.O.S.”